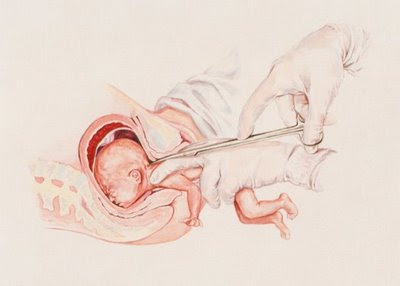 Stacey at Bastard Logic is trying to blame the abortion death of Laura Smith of MA's on the PBA Ban.

I have no way of knowing what specific procedure Dr. Osathanondh used, but one doubts that, facing a potential a 2 year jail term, he would choose the safer–but legally riskier–option to terminate a 2nd trimester pregnancy.

This article reveals the procedure used:

Smith said she learned from Osathanondh that her daughter had a suction-type abortion, and that she was anesthetized during the procedure.

I assume you know that the 2nd trimester begins at 13 weeks. So it is feasible that a doc would perform a D&X, a D&E would be easier but because of the ambiguity in the ruling doctors now perform those differently often times with more drugs making the procedure more dangerous.

There was no attempt at D and E. It was a suction-type abortion.

I suspect that the "13 weeks" was LMP-- which means it was 11 weeks gestation, which would mean the fetus is soft enough to be sucked out.

Because D and E's are used on babies whose limbs have calcified. If the baby's limbs had calcified, then a D and E would be necessary.

But even if the baby's limbs had calcified, D and X is just about never used at 13 weeks. I've been looking around the internet to get medical opinion on when D and X's are used. The earliest I have found is 14 weeks, according to the College of Physicians and Surgeons of Alberta.

But all this stuff escapes Stacey. There's an abortion ban in the US and a woman died of an abortion therefore that must be the cause. Even if she doesn't know what type of abortion was done at 13 weeks gestation.

And to bolster her case, she uses the discredited WHO study, which made estimates based on very small sample sizes.

The only people who buy that study are those who want to advance abortion. The pro-abortion movement has a history of making up numbers of dead women to bolster their case.

The thing about these feminists, is that they never think of whose lives these bans are saving: the babies. The babies whose limbs are ripped off their bodies, whose heads aren't crushed, whose brains aren't sucked out.

They think it's perfectly okay to do that to a human being.

No, no, no, they don't matter. If they have to suffer and die for the sake of others and have death imposed on them, too bad for them.

And it remains that if Laura Smith hadn't gone in for an abortion she wouldn't be dead. If all those women who had died hadn't attempted abortion, they'd be alive too.

Abortion kills women. It's a fact.

Don't want to die from abortion? Don't have one. Women have the power to save their own lives.

And Matt bastard, who owns the blog says:

It does speak volumes about those who place more value in a fetus than the lives of living, breathing, thinking, feeling women.

Nevermind that I'm a woman. Never mind that even if you did not agree that a fetus is equal, some creature died a cruel death.

Look at that face below. Matt bastard thinks that baby did not deserve to live. He think that causing pain and suffering to another human being is A-OK.

No matt, the fact that inflicting pain and suffering on an unconsenting human being says a lot about the feminist movement. The majority of the population is in favour of banning this: 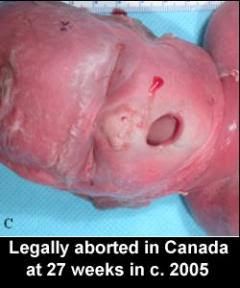