Why some pro-choicers do not show up at abortion debates

Last week, Stephanie Gray of the CCBR participated in a debate at the University of Ottawa. The pro-choicer who agreed to debate did so at the last minute. 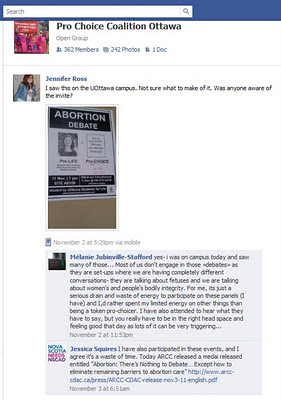 Also "you really have to be in the right head space and feeling good that day as lots of of it can be triggering ."

Triggering? Abortion is triggering? Oh really? I thought it was supposed to solve one's problems, not create more...

I suggest in the future that pro-lifers hold a debate entitled "Are fetal rights compatible with women's bodily autonomy and integrity"?

So then they won't have an excuse. We will talk about women's bodily autonomy and integrity.

I suspect though that the poor-choice side doesn't want to debate fetuses though. I think their attitude towards fetuses is neatly summed up by Joyce Arthur's quip: fetuses are not that important.

Email ThisBlogThis!Share to TwitterShare to FacebookShare to Pinterest
Why some pro-choicers do not show up at abortion debates
2011-11-14T20:50:00-05:00
Suzanne
abortion|Debate|fetal rights|poor choice|prolife|
Newer Post Older Post Home