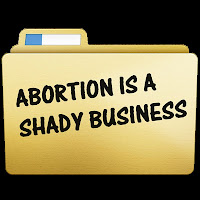 Says Daughter of the Wands:

Steve Brigham was operating a business off the inevitability of abortion. He had a record. He was criminal, a rule-breaker who spotted a need and families willing to pay him for his supposed expertise.


Seems to be a lot of that going around in abortion circles, huh?

Placing further limitations on the abortion procedure and tighter regulations on abortion facilities in the state of Maryland will not necessarily catch the rare and deviant Brigham-types any sooner in the grand pile of paperwork.


Except it does. Because if an abortionist is sloppy with medical standards, he's probably sloppy on a lot of other things. If only Kermit Gosnell's disgustingly filthy clinic had been shut down earlier then there is a good chance that the woman he killed would be alive today, not to mention a number of babies, born and unborn.

In the world of Abortioneers, abortion trumps all.

And this is an interesting admission:

When a woman resolves to have an abortion she has no choice.


No, that's mostly a myth. Many women have the choice to give birth, they just don't want to.

Some women are not desperate, in spite of their not desiring to be pregnant. In fact, I would say most women aren't.

But if a woman really, truly does not have a choice other than abortion, then why not offer her one?