...And they are happening later in the pregnancy.

A study published in April 2012 issue of The International Journal of Public has determined that Quebec's late-term abortion rate during the period 1981-2006 was 14.4 per 100 000 pregnancies. The authors extracted information from stillbirth records (as late-term abortions are recorded as stillbirths) and counted the number of abortions of fetuses weighing over 500 g.

The rate of late-term abortion has increased over time: 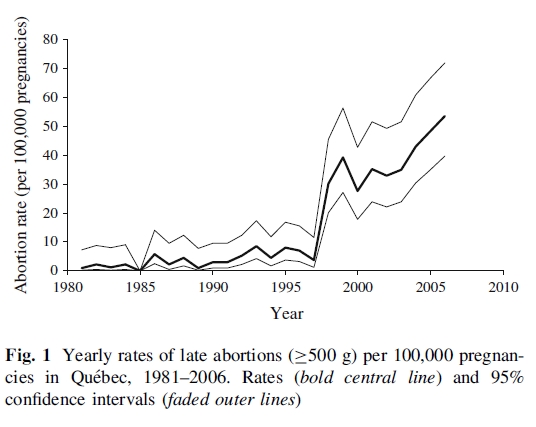 Late-term abortions where the baby weighed less than 500 grams were not included as they are not considered stillbirths, so this is a conservative estimate. Normally, a fetus at 20 weeks weighs 500 grams, but older babies have been known to weigh 300 or 400 grams.

The gestational mean for the abortion was 24.7 weeks. The range for gestation was 16 to 37 weeks.

There was a sharp increase in the number of late-term abortions after 1998. It is unclear why this is the case.

That's right, we kill them at 37 weeks but they are not human beings.