When I saw thing nasty things written about Stephen Woodworth, I was outraged.

Many poor-choicers, time and again, will say anything about their opponents no matter how far-fetched.

Then they will widely publish it, without any consideration for truth.

And then they have the nerve to accuse pro-lifers of lying!


I reached the person who sent out the original tweet, Russell Barth. He’s a medical-marijuana advocate from Nepean, just outside Ottawa. On his website, he says he is a writer, artist and caregiver to his wife.

Here’s a paragraph from his website that tells you far more than you probably want to know about him: “Using cannabis medically since 2002, he has managed to overcome his sleep apnea, restless leg syndrome, erectile dysfunction, and various addictions to pharmaceuticals, alcohol, video games, and junk food.” (If you actually do want to know more, you can find him at www.russellbarth.ca)

Like a lot of people who fiercely attack others on the internet, Barth crumpled up like a used tissue when confronted on the phone.

“That’s just satire,” he said, speaking faster than anyone I have ever met. “I’m paraphrasing. I can take it down. It’s called satire. He hasn’t contacted me … I apologize for putting it up but I want him to know that it’s just satire … I will issue an apology on my blog.

“It’s part of the perils of being in public life,” he said, as he tried to figure out how to take down the image of Woodworth he had put up. “You end up being on the internet and it’s a rough place.”


Putting words in Stephen Woodworth's mouth is not "paraphrasing" you twit.

Making him say horrible things like "rape is God's will" is not satire.

Several poor-choice Tweeters mindless RT'ed it and commented on it, spreading the lie to thousands of people. Here is a *small sample* of the reaction: 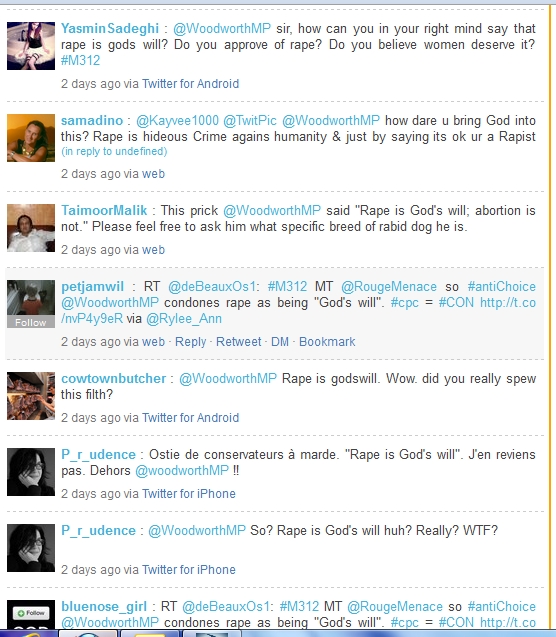 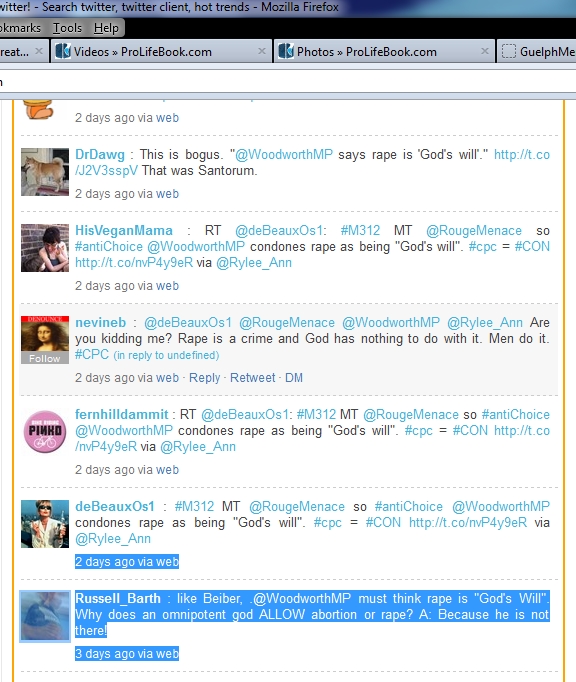 DAMMIT JANET had the NERVE to defend the smear!

@WoodworthMP: **For some the answer might be different if question was"Do you support a raped woman's right to take her child's life?"**


And what does fern hill have the nerve to write:

The false quote is grosser, but is it fundamentally different from the loaded-language answer Woody did give?

Yeah, opposing the killing an embryo and condoning are EXACTLY the same thing.

Well for a feminist, maybe. Any dishonest conflation of two issues is good enough to push her agenda!

If Woodworth decided to sue the people who published and retweeted the message, he might have a case.

I hope a journalist tracks them down and asks them uncomfortable questions, especially anonymous ones like fern hill and deBeauxOs from DAMMIT JANET. I think they'd crumple up like a tissue, too. There's a reason they don't have the guts to sign their names to their material. They're cowards.

They think they can say whatever they want about anyone in the name of political expediency, and they don't have to answer for it. Their smears, their tactics, their a**holery is part of the problem. They think their cause justifies their behaviour.