Does the literature regarding pregnancy and rape really refute Akin's claim?

Recently, there have been a slew of reports condemning Todd Akin's assertion that women who are forcibly raped rarely get pregnant.

The American College of Obstetricians and Gynecologists emitted a statement saying:

Recent remarks by a member of the US House of Representatives suggesting that “women who are victims of ‘legitimate rape’ rarely get pregnant” are medically inaccurate, offensive, and dangerous.


One report that is frequently cited to back up this claim is Holmes et al. (I rented the article).

The study involved hiring a polling firm to do phone surveys of a national sample of 4000 adult women over a three-year period.

Results showed that 413 women had experienced 616 acts of rape over the course of their lifetime.

20 cases of rape-related pregnancy were reported. When only the victims of reproductive age were considered, 5% of rapes led to pregnancy, or 6% of victims had pregnancies (one had two cases of pg). I.e. 20 cases for 315 cases of rape of women aged 12-45.

Now here's where it gets tricky.

In the discussion after the article, Dr. John G. More states that a study using DNA evidence showed that 60% of women who became pregnant after a rape were actually impregnated by a consensual partner, not the rapist himself. 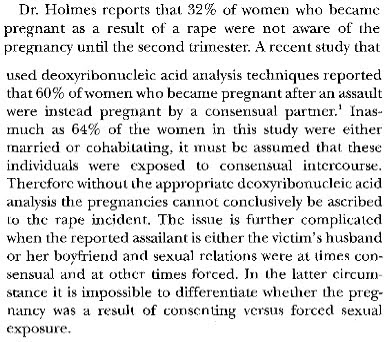 That concern was never addressed by the authors in the discussion.

In fact, recently, the New England Journal of Medicine published an article about a special non-invasive paternity test that was designed to be used on rape victims.

So are do 5% of acts of rape result pregnancy?

If 60% of pregnancies after rape are misattributed to rapists, the evidence leaves one open to doubt.

This however does not address Todd Akin's claim about why pregnancy from rape is rare. i.e. the stress from the attack inhibits conception.