Had he been honest, Judas would have left 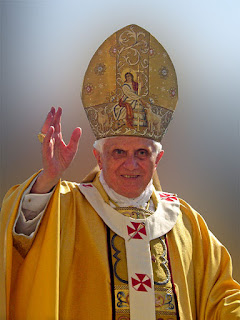 Can't help but think that the Pope is a taking a dig at liberal Catholics.


After Christ declared himself to be “the living bread which came down from heaven” many of those who had followed him, records St. John in his Gospel, “drew back and no longer went about with him.”

Asked by Jesus if they too will leave, St. Peter replied on behalf of the Twelve “Lord, to whom shall we go? You have the words of eternal life.”

The one exception, said Pope Benedict, was Judas Iscariot who “could have left, as many of the disciples did; indeed, he would have left if he were honest.” Instead, he chose to remain with Jesus. Not because of faith or love, said the Pope, but out of a secret desire to take vengeance on his master.

“Because Judas felt betrayed by Jesus, and decided that he in turn would betray him. Judas was a Zealot, and wanted a triumphant Messiah, who would lead a revolt against the Romans.” Jesus, however, “had disappointed those expectations.”

The Pope, turning to the 11 apostles who did believe, reminded pilgrims of “a beautiful commentary” of St. Augustine in which the Church Father observed how St. Peter “believed and understood.”

“He does not say we have understood and believed, but we believed and understood. We have believed in order to be able to understand,” wrote St. Augustine in his Commentary on the Gospel of John.


You can't "understand" your way into faith.

It's true that philosophy and apologetics help one accede to faith.

But they're not the same thing as faith.

Faith is telling Jesus: you have the words of spirit and life.

To me, one of Jesus' most memorable phrases is "Does this offend you?"

Then he adds words to the effect of: Shall I go back up to heaven?

I feel like liberals do not get this passage.

No. Because it offends them.

Now if they were honest, they would leave.

It's not that we want them to leave.

It is not the messiah the Church preaches.

The authentic Jesus disappoints in THEIR expectations.

Not the genuine expectations of Christ.

They make their understanding, their ideas, their expectations the measure of what Christ should or should not preach.

Instead of surrendering everything, including their own ideas, and telling Jesus: you have the words of spirit and life.

Jesus is what liberals truly hate.

In order to have true faith in Christ, you must first have faith in him. You must believe.

Only when you believe can you really understand.