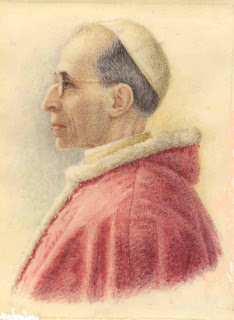 It's about time we laid the myth of Hitler's Pope to rest:

There was one more enemy Stalin wanted to defeat: the Ukrainian Catholic Church — the last Vatican enclave in the Soviet Union. Those Churches were beholden to another father, Pope Pius XII, and Stalin refused to even consider allowing any rival to interfere with his absolute reign. Therefore, he resorted to his tried and tested weapon of framing. The very prominent [Ukrainian Greek] Catholic archbishop of Lvov, Joseph Slipyj, and most of Ukraine’s bishops, including Gregory Chomysyn, John Laysevskyi, Nicolas Carneckyi and Josaphat Kocylovskyi, were framed by Stalin’s political police as “Nazi collaborators.” All were sent to jail or slave-labor camps. Some 500 Ukrainian Catholic priests were sent, without trial, to gulags — officially phrased as “destination unknown for political reasons.”

Pius XII answered by issuing an encyclical (Orientales Omnes Ecclesias) to the faithful in Ukraine, assuring them that “God will do justice” and that “in his loving kindness he will himself calm this terrible storm and finally bring it to an end.”

Stalin took Pius XII’s encyclical as a declaration of war, and he answered as was his wont: framing Pius XII as a Nazi collaborator.

On June 3, 1945, Radio Moscow proclaimed that the leader of the Catholic Church, Pope Pius XII, had been “Hitler’s Pope,” mendaciously insinuating that he had been an ally of the Nazis during World War II.

He will be canonized and vindicated.