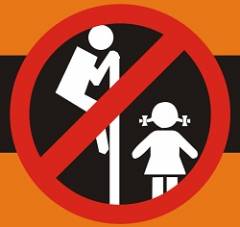 TORONTO, October 26, 2012, (LifeSiteNews.com) – An MPP who sponsored what critics call the “bathroom bill” was irked by a mail drop in her riding last Saturday that questioned her leadership and called for a repeal of the bill.

NDP Member of Provincial Parliament Cheri DiNovo has demanded (http://ondpcaucus.com/en/dinovo-demands-apology-for-hate-literature/) an apology from the Family Coalition Party of Ontario and has threatened them with legal action for what she called a “transphobic and hateful piece of literature”.

The brochurefeatures a picture of a stick-figure man peering over a wall at a stick-figure little girl in pigtails with the words “Repeal the Bathroom Bill”.

Two dozen people handed out about 2,500 brochures on Bloor West in DiNovo’s riding of Parkdale-High Park.

The brochure states that “DiNovo’s new ‘Bathroom Bill’ will give men who dress like women access to girl’s washrooms, public, showers, and pool changerooms.”

“Maybe it’s time to ask her…Cheri, What were you thinking?”

DiNovo said at the time that the bill would “create a whole new environment in Ontario”.

Critics pointed out however that the bill would create a legal right for a man who calls himself ‘transgender’ to enter a public room designed exclusively for women. There he could pursue sexual exploitation opportunities at his convenience.

The brochure makes the case that the bill “threaten[s] the lives of girls and women by putting them at greater risk from male sexual predators” and that it “allow[s] men who plan to assault women in the bathroom to escape prosecution by pretending to be a cross-dresser”.

DiNovo called the mail drop a “blatant attack on the trans communities and all who care for human rights in Ontario”.

But Eric Ames, communications director for the Family Coalition Party, told LifeSiteNews.com that the brochure was “not defamatory of the trans-community, but rather calling to attention that there are those who are intent on doing harm who can use this bill as cover to go ahead and do harm”.

“There are people out there intent on doing harm who will exploit this bill — and exploit the trans-community — just so that they can go about their will to do harm”.

Ames said that the Family Coalition Party does not have “anything against the trans-community and how they choose to live” and that they “shouldn’t be discriminated against”.

“Our concern is that this bill doesn’t appear to be very well thought out”.

“We want to protect public safety”, he said.

Earlier this month, the Toronto District School Board (TDSB) declared that transsexual and “gender non-conforming” students and staff have the right to use whichever washroom they please.

The TDSB Guidelines state that “all students have…the right to use a washroom that corresponds to the student’s gender identity, regardless of the student’s sex assigned at birth”.

So the question is: what will prevent a man calling himself a woman using the women's bathroom?