What pathologists have to say about abortion specimens 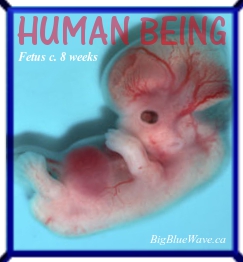 Taken from a pathology forum.

The thread begins with a pathologist asking:

Anyone get tripped on these? Im talking especially the big ones, where you can actually make out facial expressions like they knew they were being hacked the hell up (im serious). I almost went bonkers once over one, that is some scary crap. Am I the only pathologist who freaks when a 0.5cm eye ball comes rolling out of bag and stares right at you.....I know we are thinking this, just no one in pathology is talking about it.


We get a fair number of fragmented fetuses from abortion procedures and they come in a container with formalin. The fact that they're all hacked up is disturbing to begin with. Of course, there is the whole eyeball issue which freaks me out as well. Echoing in my mind is the sound effects from the movie Psycho...

One incident really freaked me, it was a boy fetus, at least 3+ pounds, around 24+ weeks. It sat decomposing because the rest of the staff was AFRAID of it, Im not joking. Then the chief of staff told me to deal with it because I was the FNG (f-kcin new guy) so I went to work. Pulled out 2 well formed arms and then the torso, headless. The head was at the bottom of the container, when I pulled it, he had this expression of such utter horror it flipped me wayyyy out, my PA saw it and ran, literally left work and went on disability (Im serious here). It was like a headless screaming baby, like it had been born at least for a split second to realize it was screwed and let out one agonal yelp. The story of this reverberated around the department, someone actually accused me of doing what should have been a ME case and threatened to call the medical board! Im not joking, I woke up once shortly after that in a cold sweat with piss running down my leg....not pretty.

I had a holoprosencephaly case too, with the proboscis. I handle the aborted fetuses okay; the only thing I really dislike is having to stick my finger in the mouth to check for cleft palate. That gives me the willies.

Who cares if the babies had to suffer and die. As long as women are empowered, to hell with any other consequences...