Pope Francis Link Round Up (because we just can't get enough) 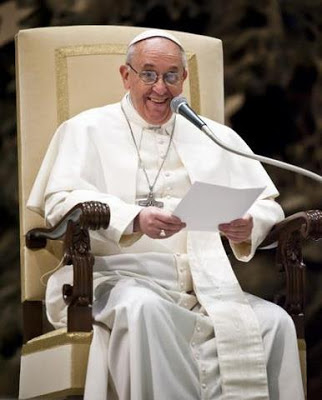 An amusing story. Pope Francis' favourite soccer team is San Lorenzo. In honour of his election, the team emblazoned his image on their jerseys. They won their game when the ball hit an opponent's head and scored in their own net. Video in the link.


Catholicism is a big tent says SoCon or Bust:

If some parts of the Faith don’t challenge us and shake us out of complacency, then either we’re mega Liars or we’re Saints. Accepting a Pope that isn’t our favourite flavour will make us all grow in sanctity, unity, and truth. And guess what? Not all of the Pope’s pastoral decisions are necessarily going to be good ones. So what? Suck it up and take one for the team because where he might fail in one area, he’ll score handsomely in another place – a place which God thinks is particularly important to heal right now.


A Street Called Straight sees A Pontifex Maximus who will kick Gluteus Maximus.


The National Post reports that Cardinal Ouellet led the pack in early voting at the conclave, but threw his support behind Cardinal Bergoglio (polling third) and asked his supporters to do the same.


Facepalm: Pope Francis still likes his typewriter. Dear Holy Father: I realize we all have our preferences. But humility requires we do violence to our inclinations and preferences, and do what is necessary. Please, use that Ipad you were given and connect to social media. Don't raffle it off.


RadTrads freak at the election of Pope Francis. Even if you're right about all those things...so what? His witness and humility is far more important than his refusal to wear a mozetta. Come on, let's try to focus on the essentials.


More about the Pope's simplicity in the kitchen. Yeah but, can he make Kraft Dinner?


And some unrelated links:


Pakistan: Man stoned to death for affair with a teenage girl . Was somewhat amused at this headline as Sunday's Gospel reading is about the woman caught in adultery.