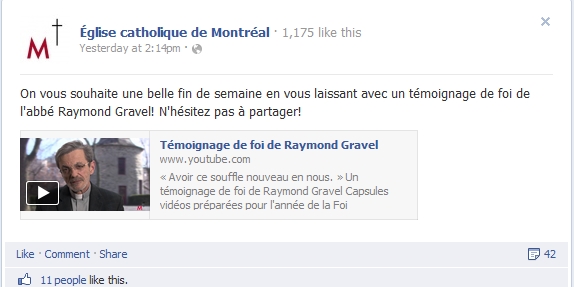 The most controversial thing the video says is at the end when he compares the papacy of Pope Benedict to the new Pope Francis. He was afraid that the Church was closing it on itself under him, whereas Pope Francis brought in a new breath of fresh air.

Notwithstanding the message, it is not acceptable for any official Catholic body to give this man a platform. He has consistently opposed fetal rights both as a priest and as an MP.

If you want to email the chancery of the Archdiocese of Montreal...there wasn't an email address directly to the Archbishop, Christian Lepine.

And please, when you email the Archbishop...don't be a jerk. You do more harm than good when you use inflammatory language.

I strongly encourage you to post this on your blogs, facebook and other social media. As you may know, LifeSiteNews is being sued by him, so it is not in their best interest to report on him. We bloggers have to pick up the slack.