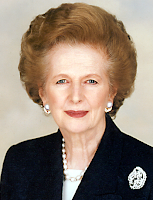 That kind of comment epitomizes why I loathe feminism.

Women who defy feminist dogmas are marginalized, ignored, or-- if that's impossible-- re-classified as "non-women". When feminists talk about women, it's as if conservative women don't exist.

That's how feminists reconcile their beliefs with reality. They tell themselves women think like them.


What feminism SHOULD mean is freedom -- freedom to have your own ideas, freedom to express them, freedom to lobby for them on their merits. Freedom to live your own lives without the state or some other institution guaranteeing the availability and feasibility of your choices.

Instead, feminism makes women un-free. It construes freedom not as the freedom to do what one likes (and fail!) but the freedom from want, and thus dependence on the state and on abortion, to liberate them from their cursèd biology.

I am responsible for myself.

And for the lives that I create through my own actions.

If I do not like the consequences of my actions, then I do not choose those actions.