RE: Gosnell: Your Blame Game is Lame, Pro-Choice 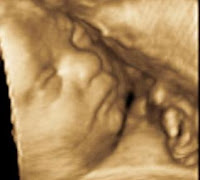 Whose fault is it that Gosnell killed women and babies?

Common sense says that it's his fault.

Whether abortion is legal, illegal, approved of or stigmatized, nothing forces a person to engage in malpractice or infanticide.

Gosnell is ultimately responsible for his actions.

But the fact that an abortionist killed women and babies sheds a bad light on the cause of abortion rights. And abortion supporters know it.

Gosnell is accused of snipping the spines of viable babies who survived late-term abortions.

The universal reaction to such acts is horror.

The problem for abortion advocates (and implicit in this whole narrative) is that if Gosnell had done what he did to babies inside the womb, then it would have been acceptable.

At least for the abortion rights advocates.

And of course the likes of Joyce Arthur would say that she does not approve of every kind of abortion.

But she and all the other pro-choicers defend the right of doctors to kill babies that old if they meet one criteria: they inhabit their mothers' wombs.  Because the right to a woman's body is absolute, even in the third trimester of pregnancy.

As long as the baby is inside the woman's body, she's the boss, and if she wants to terminate the life of a viable seven-month-old fetus, that's her business, and caring about the death of the baby instead of the woman's well-being amounts to misogynistic "Fetus Focus Fallacy".

Now this is what pro-choicers genuinely think. But they know this type of thinking looks bad on them. So they have to find a way to deflect attention off their ideology and onto the enemy--  pro-lifers.

So to hit back, abortion activists have developed the narrative that pro-lifers are ultimately to blame for Kermit Gosnell, because pro-lifers restrict access to abortion, which in turn forces women to turn to the likes of Gosnell to terminate their pregnancies.

The thing is, even if we lived in world where there was an abortion clinic on every street corner, it still would not have prevented Gosnell.

Abortion access would not have stopped a man who was willing to stoop lower than his competition and violate regulations.

So please, abortion advocates, spare us. Spare us the idea that Gosnell is our fault. We don't enable abortionists in the least. Abortion is quite legal in the country, and if it's inaccessible to women, frankly it's your fault. You want abortion to be completely free and accessible? You provide it. But of course that won't happen. You expect someone else to pay for abortions and do the dirty work for you. You always think everything you want is someone else's responsibility.

The fact of the matter is, you are stuck having to confront the question about why it's not okay to kill a newborn, but it would have been okay to do so five minutes earlier in the womb. I know that YOU THINK it's all about "women's right to her body". That absolutist justification seems pretty heartless, hollow and legalistic in the face of a viable baby's pain and death. But you wear it, prochoice. You wear the cruelty of your ideology. Or otherwise repurdiate it. Just don't be hypocritical about it.