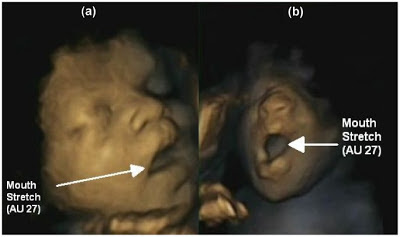 This was published in November 2012 in an open access journal. The text is free.

It doesn't mean it's invalid, I'm just adding that caveat.

It's also a small study.

And it has some neat pics.

Video recordings were made of the fetal face and upper torso visualized by means of 4D full frontal or facial profile ultrasound recordings. Fifteen healthy fetuses were scanned four times at 24, 28, 32 and 36 weeks gestation. Yawning was distinguished from non-yawning in terms of the length of time it took to reach the apex of the mouth stretch, with yawns being defined as more than 50% of the total time observed. To assess changes in frequency, a Poisson mixed effects model was fitted to the count of number of yawn and simple mouth opening events with age and gender as fixed effects, and person as a random effect. For both yawns and simple mouth openings a smooth varying age effect was significant. The number of yawns observed declined with age from 28 weeks gestation, whereas simple mouth openings were less frequent and the decline was observed from 24 weeks. Gender was not significant either for yawn and simple mouth openings.


Yawning can be reliably distinguished from other forms of mouth opening with the potential of using yawning as an index of fetal healthy development.