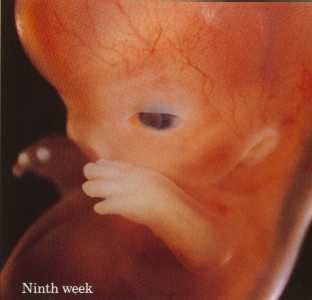 “The neural circuitry responsible for the most primitive response to pain, the spinal reflex, is in place by 8 weeks of development,” she explained. “This is the earliest point at which the fetus experiences pain in any capacity.”

At that point, the scientist confirmed “a fetus responds just as humans at later stages of development respond; by with withdrawing from the painful stimulus.”


To experience pain, a noxious stimulus must be detected. The neural structures necessary to detect noxious stimuli are in place by 8-10 weeks of human development,” the researcher continued. “There is universal agreement that pain is detected by the fetus in the first trimester. The debate concerns how pain is experienced ; i.e., whether a fetus has the same pain experience a newborn or an adult would have. While every individual’s experience of pain is personal, a number of scientific observations address what brain structures are necessary for a mental or psychological experience of pain.”

“Imposing pain on any pain-capable living creature is cruelty. And ignoring the pain experienced by another human individual for any reason is barbaric. We don’t need to know if a human fetus is self- reflective or even self- aware to afford it the same consideration we currently afford other pain – capable species. We simply have to decide whether we will choose to ignore the pain of the fetus or not,” she concludes.


You can read her testimony here.

I am not able to evaluate those scientific claims. But the following passage from her testimony corresponds to what I have read on the subject:

First, it is clear that children born without higher brain structures(‘decorticate’patients) are capable of experiencing pain and also other conscious behaviors, including smiling, recognizing and distinguishing between familiar/unfamiliar people and situations, having preferences for particular kinds of music and having averse reactions to pain. This indicates that the long-range connections that develop in the cortex only after 22 weeks (and are absent in these patients) are not obligatory for a psychological perception of pain. Similarly, experimental animals that have had the cortex removed also show a vigorous response to painful stimuli, again indicating that late-developing cortical pathways are not required for pain perception and response.