May 17th is the International Day to Fight Homophobia.

Gerard Marier, of the Montfortain Fathers, wrote a letter to homosexuals in which he criticized the Church on its stance on homosexuality. It was published in La Presse. He works in the Diocese of Nicolet. Here's my translation:


TITLE: The Surprising Confusion of the Church

In the last few years, timidly, you have come out of the closet. Now, it is in light of day, in the public square, that we see you more and more without any complex. You have acquired the right to exist and even the right of being considered full-fledged citizens.

But you owe nothing of it to the Church. On the contrary, its leaders have done everything to block the recognition of your sexual orientation. Though they have great respect for your person, though they have always defended your dignity as children or God, her has, not without the same constance, condemned homosexuality, the exercise of which, according to her, is intrinsically wrong, because it is a perversion of nature.  One of the consequences of this doctrine is the exclusion of homosexual couples from the Eucharistic table.

This stance presupposes that homosexuality is not an innate orientation, but an acquired one. Which Scientists oppose. For them, homosexuality is innate. That's what Jacques Balthazar, for example, wishes to demonstrate in his book Biology of Sexuality, which relies on research done at the University of Liège in Belgium.

Let's go further. In the hypothesis that homosexuality is acquired, we can think of several factors that explain it: absence of the father, same-sex siblings, domination of the mother, a disturbed childhood, and what else? But in no case is it a choice that you have made. Because, marked with an iron brand as it was by public opinion, homosexuality could not be a desirable orientation for you.

When the Church censures homosexuals in response to the homosexual attraction that they have for one another, she does not take into account that the attraction is not voluntary.  She judges her choice to live as a couple as if their particular attraction was also a choice. This confusion is surprising among a hierarchy made up of wise and cultivated men.

On this day devoted to the fight against homophobia, I exhort my brother priests to support the spiritual combat of prayer for you, wishing that it be done at the doors of the chanceries.

A good and fruitful day to you.


Here's where the good Father is confused.

It makes absolutely no difference to Catholic morality whether a feeling that spurs an action is voluntary or involuntary.

He should know that.

And oh, by the way, The people who run the Diocese of Nicolet facebook page used an editorial mistake (the article said the priest was from "Saint Nicolet") in order to publish the link to the article. 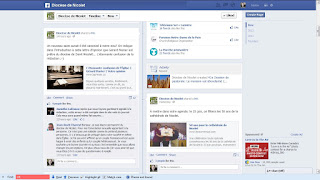 Bad enough they published the link, they have to be two-faced about it and make like this innocent mistake was the reason they posted it.

When will somebody raise the issue and say: the emperor has no clothes? When will bishops acknowledge their own renegade priests and say something to the faithful about it? And more importantly do something about it?