I'm somewhat agog at this ad on facebook that appeared on my newsfeed: 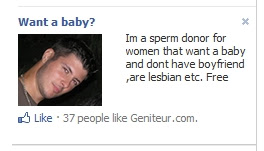 It says "I'm a sperm donor for women that [sic] want a baby and dont have boyfriend, are lesbian, etc. Free."

Hm. Somewhat in the start up stage.

He says he may even be open to co-parenting. Isn't that nice.

I wouldn't otherwise believe but he did pay for the facebook ad, so I think there's some truth to it but...

Who would do such a thing?

When I consider that so many men are trying to change the image of men as sperm-donor...