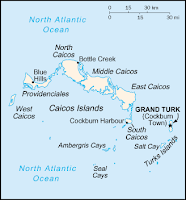 I think this is a bad idea.

We should have agreements with the Turks and Caicos to allow free trade and free movement between our two countries.

That's all we really need.

Do we need another region in Canada?

Do we need to bring in a community that has no historical connection to our country, no knowledge of its history or mores?

And vice-versa? What the heck we do know about these people?

And has anyone ever bothered to ask the residents of these islands what they want?

Here's a newsflash: maybe they don't want to give up their sovereignty. Sure they don't have a whole lot going on economically but then maybe they like self-determination. They like their way of life, and they don't want a government thousands of miles away telling them how to live.

And you can fully expect this region to be a drain, because their only interest in joining Canada is the economic development it would provide.

Is that any way to build a country?

A country shouldn't be based on mutual leeching off one another. There should be some shared sense of ideals, identity and experience.

But, I know: people won't think of that. They just want a place to spend the winter without worrying about passports and customs.

It'd be the upper-middle class' version of beer, hockey and lottery tickets: To hell with everything else, we just want a vacation spot.

And I suspect that the moment we annex the Turks and Caicos, there will be an influx of illegal immigration from nearby countries.