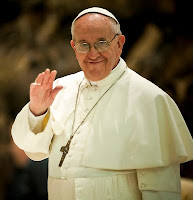 
Why are progressive Catholics and the secular press so in love with Pope Francis? Not because they love the Catholic faith, but because they see Francis as a vehicle for their own agenda.

What we dislike is the implication by the press that he is the opposite of Benedict. A typical example is a little phrase in an article in the Daily Telegraph today about Francis using a 20 year old Fiat Popemobile rather than the bulletproof Mercedes that Benedict used. The Fiat is contrasted to the other popemobile which had “a white leather seat with gold trim.” Never mind that the Mercedes company designed, made and gave the safe and efficient and modern popemobile (which cost $450,000.00) to the pope.

They put emphasis on different things.

They're both solidly orthodox.

I love how Pope Francis tries to reach out to the marginalized in an orthodox Catholic way.

I also love Pope Benedict's intellectual style and his focus on Catholic identity and "distinctives" (as some people call them).

St. Paul wrote about how believers have different preferences.

But it's all good.

The primary thing that has to be identical is faith i.e. doctrine.

Everything else is negotiable, insofar as it does not contradict the Faith.

But Fr. Longenecker is right: liberals will use Pope Francis to advance their agenda when it suits him, then hypocritically ignore him when he says things they won't like.

Dear Liberals: Don't be naive. The pope is still Catholic.