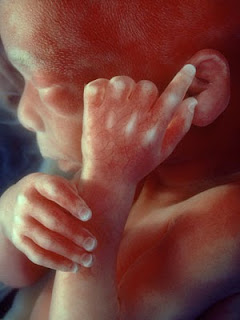 She wasn't supposed to get pregnant.

And she was going to terminate but...

As the nurse practitioner prepared me for an ultrasound, she asked if I was thinking about terminating the pregnancy. I told her I was, so she turned the ultrasound screen away from me, and began moving the wand over my stomach. She asked me about my health, about my marriage, about my habits.

Then she chirped, “Well, you’re about 24 weeks along, dear, so it’s too late to terminate,” as she swiveled the ultrasound screen toward me.

But so what? He wouldn't know about it. The fact that he wouldn't have suffered is the only thing that matters. His non-existence would be no loss.

A lot of people don't understand how dehumanizing that discourse is.