Bill Whatcott Makes You Want to Facepalm, but He has Something of a Point... 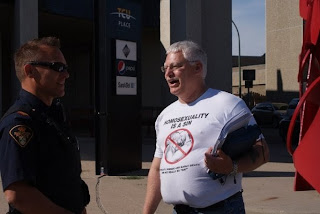 I know that's a weird combo, but hear me out.

Kathy Shaidle's opinions are the kind that become accepted about five years after she says them.

People steal stuff from her all the time.

She's a bit of a testing ground for ideas.

I mean nobody spews "Arab are violent retards" but her critique of Islam has made its way into more respectable right-wing publications, even as the elites who eventually accept her ideas disdain her as some sort of crank.

Bill Whatcott has that function in the social conservative movement.

Nobody wants to be associated with Bill Whatcott.

He's a bit of a nut. And I mean that in the nicest way possible, Bill.

He started the phenomenon of shoving so-con flyers into mailboxes.

Now the Canadian Centre for Bio-Ethical Reform is doing the same. I can't say for certain if they deliberately copied him. But so-con hipster that he is, he was doing it before it was cool (said tongue-in-cheek).

With that prologue out of the way, let me say that his targeting of the lawyers' convention was not completely foolish. Although somewhat amateurishly executed, but anyhoo...

Sometimes we tend to think that lawyers (and add to that doctors) operate on purely objective grounds, without any consideration for the cultural zeitgeist.

That is completely wrong.

Lawyers are human beings, and they are influenced by the cultural zeitgeist, even if they are supposed to uphold the rule of law.

There are many reasons why pro-lifers have trouble getting pro-life legislation in this country (and yes I'm sorry to harp on that boring theme, but I think one is not often mentioned...) is that we don't work on the lawyers and the doctors.

We don't produce that many lawyers and doctors.

We don't try to influence them.

We try to influence the "general" public opinion which is, of course, important, but you have to realize that in this world, some people's opinions are more important than others.

And we can win 80% of the public opinion, but if lawyers and doctors are not on board, it won't be worth a damn.

Politicians (who are mostly lawyers, or at least the Justice Minister is, and he would pass this) would not legislate it.

Doctors won't respect it. If anything, they will lobby for its repeal.

In fact, if we got 30% of public opinion, but got lawyers and doctors onside, the rest of the public wouldn't matter.

They would legislate, uphold and respect the abortion ban.

Email ThisBlogThis!Share to TwitterShare to FacebookShare to Pinterest
Bill Whatcott Makes You Want to Facepalm, but He has Something of a Point...
2013-08-18T23:32:00-04:00
Suzanne
abortion|Bill Whatcott|fetal rights|prolife|
Newer Post Older Post Home