Pope Francis Phones Up Letter Writer (Not a joke) 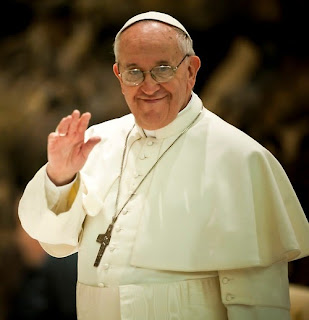 Michele Ferri is the brother of 51-year-old Andrea, a petrol station manager who was allegedly gunned down by two men including one young employee he treated like a son.

The death shocked the north-eastern town of Pesaro.

Michele Ferri wrote a letter to the Pope telling him of his inability to forgive the killers and was shocked when he picked up the telephone on Wednesday evening to hear: "Ciao Michele, it's Pope Francis."

I love how he picks up the phone himself, and calls him.

I predict the pope will get an avalanche of mail now.

I think the bishops of the world might take a lesson from that.

One of the things that bugs me about the Church is that the bishops and the priests don't know their flock.

Now I know my parish priest reasonably well, and he knows my family. I invited him over to bless my house when I moved in some years ago. He also organized parish dinners and everyone knows us because my family of four girls is so conspicuous.

But I've been in a number of parishes where the priest didn't know me from Adam. And they seemed to busy to bother with anyone who wasn't in their social justice demographic-- very poor, very elderly, very...something.

And I've met Archbishop Terry a couple of times, but at least he has a bit of an excuse, seeing as he has tens of thousands of souls under his care. Still, there are bishops vicars underneath him. I wouldn't know them if I tripped on them.

We got to work on that dynamic.