The 3 Waves of Dehellenization and Why You Should Care 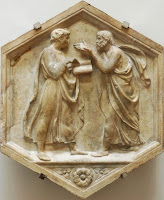 I am reading Fr. James V. Schall's commentary The Regensburg Lecture, in which he tries to explain Pope Benedict XVI's famous address. The present blogpost is a summary/commentary of Chapter IV "Modernity and the Three Waves of Dehellenization."

The Regensburg Lecture is best remembered for the violence Muslims incited in its aftermath after the Pope quoted Byzantine Emperor Manuel's statement concerning Islam and violence.

But the gist of the lecture was about the relationship between faith and reason. Implicit in the lecture is that the lack of reason can lead to violence, as with the case of Islamism. Only by reclaiming this Greek heritage can we be able to discuss our beliefs on rational grounds.

In the lecture, Pope Benedict talks about the history of the dehellenization of the faith (and by extension the culture), the attempt to purge it of its Greek philosophical heritage. Greek philosophy affirmed that reality, both physical and metaphysical was ordered and knowable through reason alone. Biblical writers both infused the Scripture with this idea (see Logos in the Gospel of John) or they wrote with the same assumptions. Implicit in this Greek heritage is the notion that faith and reason go hand in hand.

Dehellenization then is the shift away from reason as a means to know and understand reality. Not just "any" reason, but reason that posits the existence of universal and objective truths knowable from deductive processes.

In his book, Fr. Schall lists three waves of de-hellenization that has brought us to where we are today, which we call modernity. Here is a summary of his presentation. (Headings are my own).


The first wave of dehellenization was the separation of faith and theoretical knowledge in the Early Modern Period. First, through the Reformers who sought to restore the "pure word of God" by eliminating any philosophical grounding for faith or doctrine. Second, by rejecting reason as the basis of any valid knowledge, which was accomplished by Immanuel Kant. Faith became cordoned off from critical evaluation, and was seen as "inspirational". Reason was was purged not only from the religious world, but the secular world itself. It was believed that reason could not reach beyond its own limitations to attain any theoretical (as opposed to "practical") truths. Belief in the feebleness of human reason became so prevalant that, in the words of Fr. Schall "it would lead us to a world in which we can only know ourselves, but a world in which each of us have a different understanding of what we really are." Of course, this will have implications for later on. (See the third wave, subjectivism).


Now that faith was entirely outside reason, and reason itself was no longer a means to know truth, faith became subject to the prevailing empiricism of the day. Empiricism posited that only data could be a source of knowledge. In the wake of this intellectual trend, Adolf Harnack developed the "historical-critical" method. It sought to know, on a purely secular level, what could be affirmed about Jesus in Scripture. In this way, theology became a kind of science. However, because it was believed that Jesus' divinity could not be rationally grounded (and it was not subject to verifiable proof) his divinity was rejected, and he was treated as a good man whom we should follow.

Fr. Schall explains it this way:

"Modernity, in its philosophical sense, means that we are bound by nothing. There is no order in things or in the mind, for that matter, that would ground any order. There is only the order that we ourselves make and impose on things. This view of modernity was developed in large part, to protect us from the notion that truth obliges us. The real question becomes, in the classical sense, what "limits" reason? The answer is, what is, reality."

In the encounter with other cultures, this becomes a problem.

Multiculturalism implies that "those cultures that do not have a tradition of reason need not examine themselves about their own theoretic and rational premises."

And so what is the point of knowing all this? Here is my take...

Dehellenization makes it impossible for Islam and the West (and the Church!) to talk to one another.

Although there was some hellenistic currents in Islam, it wasn't very strong. The predominant approach to faith is voluntarism: "It is true because God said so." [i.e. God wills it].

Western relativism, in its own way, has its own type of voluntarism. "It's true because I think so."

In either of these systems of thought, as Fr. Schall writes:

"Nothing objective exists to distinguish one view from another except power or choice or [...] taste."

Each side rejects the notion that reality is intrinsically ordered (and therefore coherent) and intelligible.

Without that idea power or choice become the means to assert what one thinks or feels to be true.

And no critical evaluation is possible.

And without that ability to enter into the other's system, evaluate and correct, no dialogue is possible.

This is where power and choice make freedom of religion and conscience impossible.

Because there is always this anxiety that allowing people too much freedom, or the wrong kind of freedom, will lead to undermining what they believe to be true.

Note that is under both systems that this freedom is under most attack.

Without that freedom, coercion becomes the order of the day. It's the only possibly logic. If truth isn't based on reason, then in the public square, it will be based on power. People will say "this is true because this is what we think, and if you think otherwise and threaten our ideas, then we will eliminate you from the public square."

And this is exactly what has happened to Christians.

I realize that it's a tall order. And of course, this lecture was given in the context of the university, which is the best place for that discussion to take place because there people are used to highly abstract discussions.

But we internet apologists have to be aware of this as well.

Because the rejection of reason is an intellectual cancer. Pluralism is the basis for the rejection of absolutes, especially if they're grounded in Christian thought. At the same time, the dominant forces of our world use the coercive power of the state to eliminate opposition to their agenda without sufficiently explaining itself. It's a case of "it's true because we think it's true and we have more power and public support than you."

So there you go. I hope you have something to chew on.