What to Do if Pope Francis Phones You 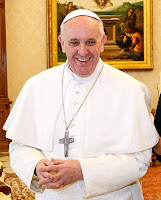 
Topping the list: Be ready, especially if the land line rings.

The 76-year-old Francis has a fondness for making calls the old-fashioned way, using land lines and placing the calls himself, often surprising recipients by simply announcing: “It’s the pope.” He’s called an Italian man whose brother was killed and a Colombian woman who works in Rome to thank her for a book.


Beppe Severgnini, a noted humorist and Corriere columnist, offered other tips in his article:

• Listen first, then talk, and if the conversation permits, ask the soccer-mad Francis about the recent match between Italy and Argentina.

• Always ask how Benedict XVI is doing. “It’ll make him happy,” Severgnini noted. Francis frequently refers fondly to his 86-year-old retired predecessor who is living on the other side of the Vatican gardens.

• Don’t ask for any favors.

Severgnini also said even though Francis is fond of using the informal “tu” in conversation, stick with the formal “lei” but don’t overdo it with exaggerated titles like “magnificent.”

I understand the Pope's English is not very good, but apparently he can get by in French.

I predict a spate of crank calls from people claiming to be the Pope. :)