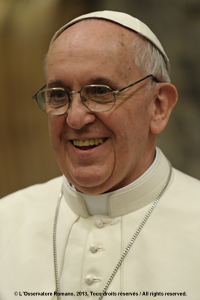 Ever since America published that famous interview with Pope Francis, people have been getting the strange impression that Pope Francis somehow wants to play down the pro-life cause.

But if there is any doubt on Pope Francis' pro-life credentials, here are seven quotes I gathered from the internet. I'm sure there are more, but I can't access them only because I don't read or translate Spanish very well.

Now ask yourself: does this sound like a guy who's soft on fetal rights?

2.  The moral problem of abortion is of a pre-religious nature because the genetic code is written in a person at the moment of conception. A human being is there. I separate the topic of abortion from any specifically religious notions. It is a scientific problem. Not to allow the further development of a being which already has all the genetic code of a human being is not ethical. The right to life is the first among human rights. To abort a child is to kill someone who cannot defend himself.


3.  Defend the unborn against abortion even if they persecute you, calumniate you, set traps for you, take you to court or kill you.

4.  In Argentina we have the death penalty. A child conceived by the rape of a mentally ill or retarded woman can be condemned to death.

5.  We should commit ourselves to ‘eucharistic coherence,’ that is, we should be conscious that people cannot receive holy communion and at the same time act or speak against the commandments, in particular when abortions, euthanasia, and other serious crimes against life and family are facilitated. This responsibility applies particularly to legislators, governors, and health professionals.

6.  Even the weakest and most vulnerable, the sick, the old, the unborn and the poor, are masterpieces of God’s creation, made in his own image, destined to live for ever, and deserving of the utmost reverence and respect.


7.  Human life must always be defended from its beginning in the womb and must be recognised as a gift of God that guarantees the future of humanity.