Why I Never Went Gaga Over Ann Coulter 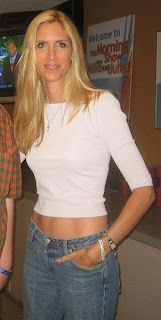 Ann Coulter was on television plugging an old book that just came out in paperback and a new one coming out next month. So Ann did what Ann always does to drum up business. She came up with something outrageous to say that would get the buzz going.

She went on Sean Hannity’s TV show and decided the best way to create some noise would be to call the first black president of the United States of America … a monkey.

And to make sure everybody got it, she used the M word not once, not twice, but three times.

She told Hannity that Vladimir Putin “is making a monkey out of Obama” in the Syrian situation. She said. “Putin, time after time, made Obama a monkey.” She said Putin created a situation in Syria, “to make Obama look like a monkey.”

Yes, we all know it’s an old, harmless expression: “He just made a monkey out of you.” But surely Ann must also know that “monkey” was a favorite word of racists, especially the really stupid ones, who got a big kick out of comparing black people to monkeys.

Of course she knew. That’s why she said it.


I think Ann Coulter is a very good writer and that she is often right.

But I find her approach toxic to the soul.

We all love it when the opposing camp is the butt of a clever barb.

The problem with Ann Coulter is that it doesn't stop with the one barb.

And of course, as Bernard Goldberg said, these barbs are often very provocative.

These barbs don't just poke fun at their victims. They really degrade them. For instance, she treats liberal  men as girly men. And goodness knows there are quite of few (and I don't mind saying it), but hey they're not all limp-wristed metrosexuals.

Just as with Marshall McLuhan, the medium is the message, with Ann Coulter, the style is the message. The purpose of her writing is less about the arguments and more about putting people down and filling conservatives with glee at her outrageousness.  I'm not opposed to outrageouessness, per se, except that hers can be so extreme and so constant that it undermines the seriousness of conservative thought.