Do Pro-Lifers Unintentionally Depersonalize the Unborn... 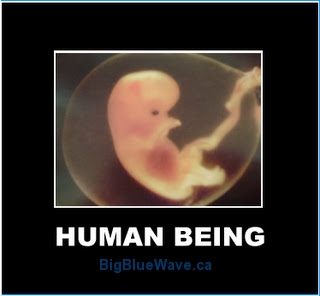 ...Through signage (whether of aborted fetuses or cute babies?):

Would we not ask the mother of that person for permission to display the dead body of her daughter on our sign, as we ought for any other person? (But the mother had her daughter killed, an imaginary defendant might respond. But have we considered the possibility that the mother has been reconciled to God and man and now exists in a relationship of tragedy and love with her deceased child, with her child as a particular you identifiable by the question who? What I am trying to ask is whether “the aborted fetus” has a name, but more than that, whether we even considered the possibility of a name, a possible who-ness!) And if not the mother, did we ask the grandmother? The brother? These are only absurd questions to consider when plastering a dead body of a person on our signs if we are already involved in an act of unintentional depersonalization, by which what would be due to any other murdered person is not due to the aborted person.

Do journalists and other activists ask permission to expose injustice?

The answer is no.

If you want, you Google images of lynched Black Americans.

Does posting pictures of their deaths automatically dehumanize them?

It largely depends on the mental baggage you bring to the picture.

There were people who created postcards of lynched Black men, in celebration of the event.

And of course, there were those who were appalled that anyone would treat a human being that way.


No matter how I die, do not reduce my person to unidentified testament against injustice. The corpse is not a logo. The body of the human person is not a brand name through which we recognize that inglorious company — “the atrocity of abortion.”


Well a picture doesn't reduce a person to a testament against injustice.

Again, it's a question of the baggage brought to the picture.

If nobody knows you, or acknowledges your humanity in the first place, then yeah, maybe your corpse becomes a sort of logo.

But the problem is not in the exposure of the evil, but in the mentality of the viewer.

What good is it if we convince a few people, if we convince millions of people, that abortion is affront to all that is good and wholesome and beautiful in this world, if the very mode by which they accept this truth is through the depersonalization of the fetus.


You can't judge an act solely by its results. I have expressed concern about how pictures of aborted fetuses may backfire as people become inured to the violence.

The solution then is not that we stop exposing the violence.

It's that we also put forward the humanity of the unborn in other contexts so that when people see the unborn, they are shocked.

Consider a few of the more generally adorable pro-life signs: A picture of a baby that reads “Please let me live.” An ultrasound of a fetus that says “I have a right to life.” I understand the sentiment. We propose to give a voice to the voiceless, to articulate the goodness of life over the skull-collapsing badness of abortion, and I hold nothing against those who see such signs as adequate expressions of this noble sentiment.

But what are we doing? What is the mode by which we convey the truth that the life of the fetus should not be snuffed at our will?

Quite simply, we are captioning a fetus. Now, to caption a fetus with a pro-life declaration is the establishment of a fiction — that a fetus could ever declare such a thing, or any thing at all. I have no illusions of some unspeakable ignorance on the part of those who make these signs, that they really think that the fetus is somehow voicing/thinking that “I have a right to life.” Rather I think we are involved, once again, in unintentional acts of depersonalization.

We are creating of the fetus an object over which we have power. We are rendering a particular person into an whiteboard on which to marker in our cause.


Then I guess every act of meme-making, every use of a stock photo is depersonalizing?

I will grant it's a form of fiction. No fetus can articulate the thought "please let me live."

When we caption babies and animals, born and unborn, I suspect that every viewer realizes, if only unconsciously, that it's not the creature in the photo who is articulating that.

However, we can reasonably deduce that a creature has sentiments similar to the caption.  Creatures want to live. This is a basic fact of nature. So imposing a caption is not wrong. It is wrong to impose a thought of "my baby is pro-choice" because a baby has no concept of abortion.

We are using a particular person to achieve an end, and I can’t help but believe that the only reason we can stomach using people as a means to an end is because — on some level — we ourselves are denying the person of the fetus.


Then I guess all marketing, all meme-making is depersonalizing.

How do you affirm the fetus is a human being, but then dehumanize them?

That is completely contradictory.

Giving a voice to the voiceless should not mean making a caricature out of the voiceless, making of the person a mere symbol. For even though what we are saying is true, even though the fetus does have a right to not be killed at the will of others, the mode by which we express this truth matters.

Where I do think there is depersonalization is what I see as the lack of interest in the fetus as an object of study outside of the abortion debate.

Fetuses are only interesting insofar as we get to affirm a moral stance.

If we really think that fetuses are people, we should study them like any other category of persons.

If we did write about and examine the unborn like other segments of our population, then when the abortion signage, that would make them shocking.