Ezra Levant on the Media Hypocrisy on Rob Ford 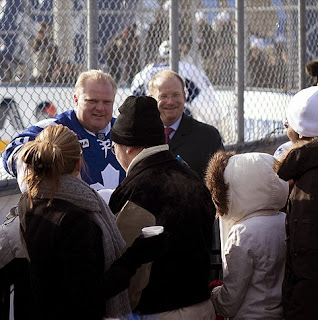 I knew I could expect the right to focus a lot on media hypocrisy in the Rob Ford scandal.

That reaction has become a bit boring, frankly. And trite.

Not that I deny that there is hypocrisy.

But I really do think that Rob Ford should step down and deal with his issues.

Nevertheless, I thought this rant by Ezra Levant was quite good.

Because he makes a very good point about the Media Party: they hate Rob Ford and the working class people he represents.

And just by chance, I happened upon this editorial by Michael Bolen that is the epitome of what Ezra Levant is talking about:

We like to imagine we're nothing like our neighbours to the south, but Toronto has its red states and its blue states; it has its Michele Bachmann, Rick Santorum and Herman Cain wrapped up in one neat 330-pound package.


Yeah, all those conservatives. How dare they exist in Toronto.

I also found this column in Macleans. Whose fault is it we're in this mess?  According to Jonathan Gatehouse, it's the voters:

If you elect a clown, you don’t get to act surprised when the circus comes to town.


How dare people vote for a conservative.

I found those two columns by accident. But they're exactly what Ezra is talking about.

Some, however, are not. They're markers of their class. It's just interesting that the left who pretends to care about the working people hold them in contempt. Now I realize Rob Ford was never a working class person to begin with, but he plays one on TV and it's that persona that the media party hates.

I don't think they get that, yet.