This column is so good, it's hard to pick what to quote:

What the elites have not grasped is that, notwithstanding his various lifestyle sins, Mr. Ford has the gift of projecting a very basic and powerful political message: that he understands, and represents, the majority of people who do not have newspaper columns, or well-read Twitter feeds, or morning shows on CBC.

Ford was an outsider to the elite-media game. And being an outsider is something almost every ordinary citizens feels nowadays. Government is not for them. Instead, it’s something for containing and managing them, talking down to them, pushing them aside when convenient — and then sucking up to them when vote time came.

Thus, these same voters see in the attacks on Mr. Ford not a little touch of contempt hissed at them for electing him in the first place.

I am not working class. I am solidly middle class. I don't watch much hockey or drink beer or work a physical job.

But I grew up with people who did.

And having been among educated classes, among ambitious politicos, I know that there is plenty of class-contempt.

Now there are plenty of low class things I hate. I hate UFC. I hate tabloids. I hate NASCAR.

But what I hate even more than that is the hypocrisy of serving the working class without their input and their values.

I also hate the idea that the elites tell them what programs they need, while they take their hard-earned money from the physical jobs and their small businesses, and when they complain about taxes, they raise them even more.

And yes people, a 1.5% tax hike is still a tax hike. I'm looking at your municipal councilors.

Maybe working class people aren't very educated. But they understand money. They understand that government takes a lot of their money and wastes it on crap that they don't want to pay for.

But the working class, they don't understand what's good for them or for Canada. They're self-centered.

Most voters are self-centered.

Which is precisely why statism is such a cancer.

Most people are just trying to look out for themselves and their families and that's only natural. So it's only natural that they want to keep their own money.

But the elites have the gall to cast them as selfish.

Selfish for wanting to keep their money and not pay for programs to help people poorer than themselves that will help them.

That also just happens to create a bureaucracy to provide lots of cushy white-collar government jobs for university grads who can't get jobs anywhere else.

And of course, that win elections through electoral goodies.

And now the elites feel reaffirmed, I'm sure. Certain of electoral victory. Safely ensconced in their social, cultural and political power.

I'm not making excuses for the guy. I'm telling it like it is.

As if to reinforce the point, I feel upon this CTV article:

Toronto investigating use of city logo on pro-Rob Ford billboard

It concludes by quoting the Bible: "Let the one who has never sinned throw the first stone."

HuffPo also had another disparaging article, with pic: 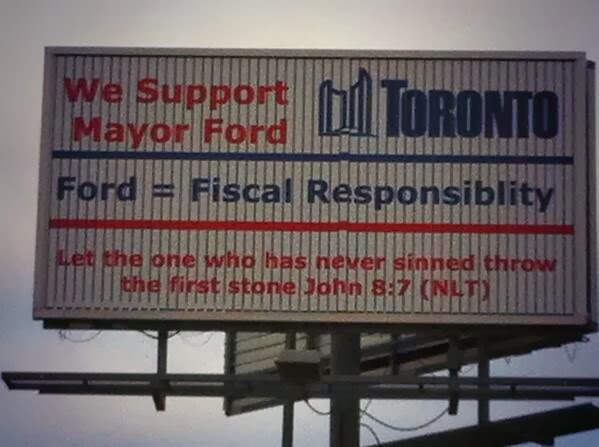 Not the best billboard, to say the least. And I wouldn't have picked that Bible phrase, although there are parallels between Rob Ford and the woman caught in adultery, i.e. the use of a sinner to make a political point.

The point is: why should this billboard be news?

(And they call it a brutal typo, but truth is, if they hadn't pointed it out, I wouldn't have noticed a missing "i".)