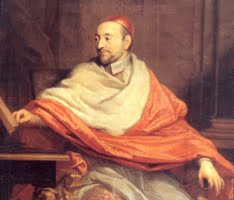 God has become a child, and so he wants first to be known and adored by a child, and this is one of the first emanations of the childhood of God, manifesting himself to the universe. God is a child, the world ignores, heaven adores, and a child is the first person in the universe to recognize and adore him, and he does so by the homage and secret operation of God himself, who wants to act upon children. He wants to honor himself as child by giving the first knowledge of himself to a child in the world, making him his prophet in the universe. Thus the Infant-God is recognized and manifested, not by and angel, but by a child. So his first prophet is a child, just as shortly his first martyrs will be children.