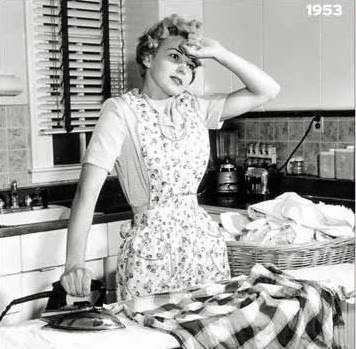 I disagree, but I'm not offended.

See how that works?

I think a lot of what she said is stupid, but I'm not upset.

Because ultimately her opinion doesn't matter.

My opinion of myself matters the most. (And God's).

First I'd like to get to the part I (partially) agree with:


Having kids and getting married are considered life milestones. We have baby showers and wedding parties as if it’s a huge accomplishment and cause for celebration to be able to get knocked up or find someone to walk down the aisle with. These aren’t accomplishments, they are actually super easy tasks, literally anyone can do them. They are the most common thing, ever, in the history of the world. They are, by definition, average. And here’s the thing, why on earth are we settling for average?

If women can do anything, why are we still content with applauding them for doing nothing?


It is true that marriage and childbearing is common.

And a lot of what I do all day is, as Gloria Steinem described it "sh** work".

There's nothing extraordinary about wiping a baby's butt or picking up toys or making supper.

Sometimes I find the praise of motherhood on that score a little cloying.

The real value of motherhood is not in the actual task. Yep, the vast majority of women can do it. It doesn't take a special education, and training can be minimal. If you don't know how to do something, Google it.

So on that score, the blogger is correct. It's average and unexceptional.

But the real value of motherhood is in placing human life above all else.

Is there anything more important than human life?

Is there anything more important than molding a young person for life?

This lady wants to be successful.

I can relate to that.

Now unless she had a grossly dysfunctional family life, her parents probably put her on that path. They had something to do with her education, values and motives.

Now you may say that her values suck. Be that as it may, if she wants success in life, chances are, she has some special talent that merits that kind of ambition, and her parents help foster it in one way or another.

An individual is not self-created. We all owe our parents much of what we are today, for good or for ill.

So yeah, anybody can be married (although it takes some ability to have a lasting and happy marriage) and anybody can make a kid. It takes some wisdom to raise a child properly. You don't just pop out a kid, feed, clothe and send him off to daycare and school and he raises himself.  Kids need love. They need to be taught. They need specialized attention. You can't treat all kids the same.

Sometimes kids have problems that need a certain amount of knowledge and savoir-faire.

So no, motherhood isn't something that will earn you a Nobel Prize and it's not about that. It's about relationships. I consider a relationship a kind of accomplishment.  Not in the same vein as writing a book or managing a Fortune 500 company. But it's an important task that requires a type of talent and dedication.

And I think ultimately why women devote themselves to their families and less to their careers is that intuitively sense that relationships are more important than worldly accomplishments. Some people operate on the assumption that their worldly accomplishments validate them as a human being. That's an illusion. Your self-worth has strictly nothing to do with your talents or abilities. You're not superior to others because you can run a country or win an Olympic medal or get a PhD.  People give themselves that illusion to prop themselves up. All their lives they heard from family members, profs and mentors that they were the best, that they were going somewhere and that they were special, in a class by themselves because of what they can do.

Your political office, your Olympic medal, your PhD won't love you back. You get them, you live your moment of glory, and then it's gone. How many authors have lived the high of getting a book published and then the sinking feeling of "is that all there is?"

The other phenomenon is that when you rely on your talent and your abilities to validate yourself, then other people do, too. So that when you mess up, or someone better comes along, they dump you. To a lot of people, you will be a number or a dollar sign. When you do not make any money for them, they dump you.

Family life doesn't work that way, and that's why I'm grateful for my lack of accomplishments.  Yeah, maybe I spend my days doing sh** work that's not important (in itself). But I know that by doing this, I'm loving my kids and my husband. And that's more important. And I know this feminist blogger might say that I feel this way because  I never "did" anything with my life. But I know the truth. I know I could have done tons of things with life. I didn't.

I chose love. Love is what validates me and my family.

What irks me about so much of feminism is that it operates with this same unconscious assumption: that getting out in the public domain the way men do is way more important than feminine values of family and relationships. Men and women are equal, not identical. When feminists undermine feminine values, it undermines their own cause.

This lady is under the illusion that women are brainwashed into being self-sacrificial. As if neurobiology had absolutely nothing to do with why women are the way they are. It's too bad because if there's one thing that dispels you of that illusion, it's having kids.