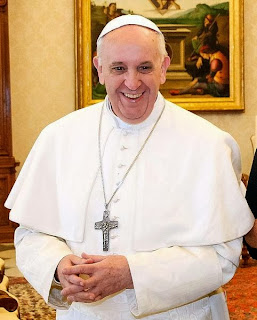 It took a Hispanic like Fr. Angel Sotelo to know this:

A Mexican like me, who grew up knowing many of the pre-Vatican II Spaniards, priests and nuns, am completely at home with Francis. He is like a typical, older barrio, Hispanic priest. Acts the same, talks the same, makes the same wisecrack remarks at times, and shows the same loathing of formality, fancy dress, and “proper diplomacy.”

So what's the problem?

My question is, however, whether his Latino style of acting and talking needs a little more finesse? When a Latino Pope deals with northern Europeans, Anglos, and traditional American Catholics, he should not forget that they are not Hispanic, and you cannot act toward them with the “talking down to them, finger waving” demeanor of an elder Hispanic.

For instance, the traditional English-speaking Catholics who love the Latin Mass and clear teaching of the old catechisms, do not care for Francis’ sarcasms. They don’t care for the comment to Italian Bishops that the New Liturgy represents an “emancipated” style from the formal Catholic rituals and old, artistic vestments of Msgr. Guido Marini.

Many old-fashioned Catholics are aware that they behave seriously at Mass, but Francis making remarks about how they should loosen up and show more happiness and joy in their expressions is awkward. Put another way, if Francis thinks white guys can’t dance and have no rhythm, it would be smart if he not say that out loud and instead flatter white people for what they are good at.

But maybe Pope Francis would do well to say speak to Northern European Catholics. It's not just the Anglosphere that feels this way. The French-speaking world also has a lot of more formal Catholics.

When we go to Mass, we are going to a crucifixion. There's something out of place about being chipper at Church. There is a kind of holy sadness that is proper to being Catholic, and not incompatible with joy.


And regarding us White, Anglo Catholics:


They don’t mind that Francis wants to run around and play kiss kiss with the pagans and the worldly crowd, but he should let the Catholic culture warriors know that HE HAS THEIR BACK—and he hasn’t said so, clearly.


Yes, Holy Father, we really could use your words of encouragement.