Bill Whatcott's Born in a Graveyard: A fun read 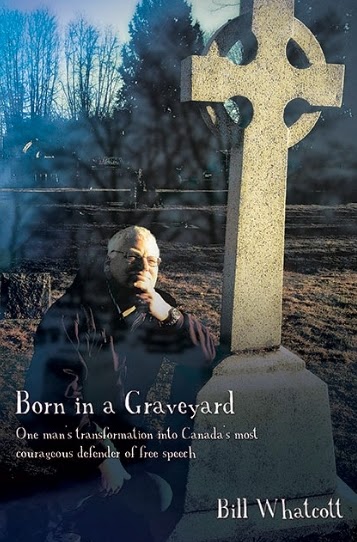 Bill Whatcott's Born in a Graveyard is a very fascinating read. It takes you from his dysfunctional childhood and youth, where he was raised in foster homes, to his even more dysfunctional and criminal young adulthood. He spent a good amount of time in jail, mostly for petty crime, but he did one stint for hijacking a bus.

Notwithstanding his criminal background, he did indeed accept Christ as his saviour, in a graveyard in Windsor, Ontario. Bill had many relapses even after his acceptance of Christ. For some time afterward, he consumed drugs and committed petty crimes. And once he made a firm resolve to go straight, he had no idea how to get a job and live a decent life. Even during his years of social conservative activism, he screwed up two marriages, and struggled with sexual addiction, to the point of picking up two prostitutes.

One the important lessons that his memoir imparts is that Christians are works in progress. But you do not need to be perfect to proclaim the Gospel, and you shouldn't wait until you're perfect, because nobody is perfect.

Another aspect I liked about the book is his memories of his early pro-life activism. I consider it important source material for a future history of the pro-life movement in Canada. He has many anecdotes about his time picketing various abortion clinics, and working at Aid to Women in the 1990s. For those of use who weren't there, these stories are precious connections to the past.

In 1999, He moved to Saskatchewan to get a job as a nurse, and support his wife and family. It was here that his "career" as a social conservative activist really took off. He began showing graphic abortion signs, and ran for Mayor of Regina. He is also remembered for having crashed the local gay pride parade, which was later lampooned on the Daily Show.

Then he started distributing flyers. Flyers about abortion, about homosexuality, about Islam-- any topic that irked him at that point.

One of the problems with Bill's approach to activism is that it is autistic.

Having three (and probably four) daughters with autism, I know a little something about it.

Bill's goal is to spread the Truth. A laudable goal.

And being so driven, he does not care about the consequences of getting his message out, so long as the information is received.

So he does not care if he loses his house, his wife, his career, his assets, his reputation, nor does he care whether he suffers physical injury.

The problem with this approach is not just the use of repugnant images or inflammatory language.

The problem is that it communicates a complete lack of concern for the person reading the pamphlet.

But getting them the truth shows a great deal of concern, Bill would answer. They need to know the truth about potentially harmful behaviour.

Now of course Truth is much more important than feelings. It's way more important for them to know the Truth than the fact that they're mad about it.

But the other side of the coin is that if they are not shown concern in a way that they understand, they will feel hated and will not receive the message.

And I think that's the crux of the problem.

Broadly speaking, the more people feel antagonized, the less open they are to your message. The message may be 100% valid; and you may be completely justified in putting hardhitting pamphlets in a mailbox; but if the readers feel you no concern for themselves, they will have no concern for your message.

There's a reason why there's a whole field of communications that deals with how to communicate and get people to accept your message.

It is true, that there is a certain prophetic aspect to his witness, and when you're a prophet, you will be hated no matter how nicely you sugarcoat the message.

But Bill does it on purpose to be outrageous. Nobody likes having their buttons deliberately pushed. It feels very manipulative.

So like the autistic kid, he has a goal, and he seeks means to accomplish his goal without any regard for what anyone else thinks or feels.

It's no real wonder why this guy is so hated. I do receive his emails, and he does report a few conversions now and then, but those conversions come at the cost of alienating the hell out of most of his readers.

That being said, Bill does more than 99% of pro-lifers in Canada.

It's pretty hard to criticize Bill Whatcott when he puts himself on the line, when most people have never had to sacrifice anything for the pro-life cause, never mind their livelihoods.

If you can get over the disagreement with his overall approach, Born in a Graveyard is a great read. It's full of amusing anecdotes. As Kari Simpson writes in the Afterword, Bill Whatcott is something of a guilty pleasure.

Besides being a guilty pleasure, I think what this book does is humanize him. Social Conservatives, particularly those of the radical variety, are deliberately dehumanized by opponents to make them look like heartless Nazis. Bill is anything but heartless. He couldn't hurt a fly and I'm sure he'd give the shirt off his back if someone else needed it. By humanizing him, I think it makes him a more sympathetic figure, and by extension, it makes our cause more sympathetic. One reason people don't want to be pro-life is that they don't want to be associated with people like us (or what they think we're like).

It's just too bad that Bill's flyers tend to reinforce some of those negative stereotypes.

You can pick up Bill's book at BillWhatcott.com