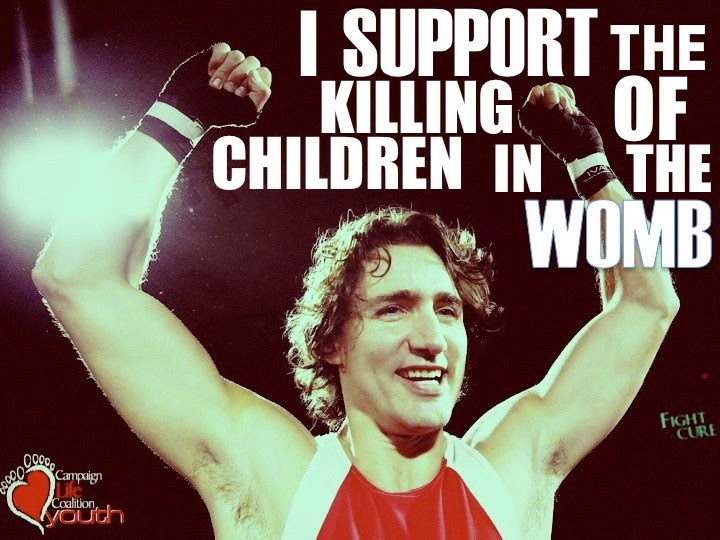 ...according to this report by TVA.

The Liberal Party is a party that defends the Charter. It's not true that a Liberal MP will vote against a woman's choice.

Commenting on the opposition showed by the Church:

The people from the Church have their role, I have mine. My role is to defend the interests of Canadians.


Some people might think that the ultimate purpose is to get Justin Trudeau to change his mind.

I don't think any pro-lifer really thinks he will.

That is not the ultimate goal.

For the faithful Catholic, the ultimate goal is to get Catholics to understand that supporting abortion is incompatible with our faith.

For too long-- way, way too long-- the clerical opposition to abortion was flaccid. Oh sure, you might think, there were some major figures who spoke out, like Cardinal Carter.

But let me put it to you this way. I told my husband that four bishops have spoken out against Justin Trudeau.

He said: only four?

These bishops are getting press because they're the archbishops of large dioceses, and the Vatican tries to put its best people in these places.

But how come the bishop of Amos, or Thunder Bay or Prince George hasn't said anything? (Just to pick three random dioceses in Canada).

And of course, we have yet to hear from the Archdiocese of Montreal. I guess they're too busy watching the hockey playoffs over there. Okay, in fairness, they are trying to fight euthanasia in Quebec, but it would only take five minutes to put out a press release to say that His Grace is "disappointed" (at minimum!) in Trudeau's stance. I am kind of disappointed, knowing that Archbishop Lepine is otherwise a really pro-life man. I would expect something like that from someone who doesn't take pro-life philosophy all that seriously.

As long as Justin Trudeau is not denied Communion for his stance, Catholics will get the distinct impression that supporting abortion is okay, especially in Quebec. If only bishops in English-speaking Canada condemn Trudeau, Quebeckers will think: oh, well, that's them. We're different. I tell you, they really think that because a condemnation comes out of the mouth of an English-speaking bishop, or any bishop from the rest of Canada, such declarations do not apply to them.

And Catholics will continue to get the idea that it's perfectly fine to promote abortion. See, Justin Trudeau does it, and nothing happened to him! That's what they'll think.

Political leaders come and go. So do governments. But this is about souls. And the soul of our Church, so to speak.