This Meme Says It All 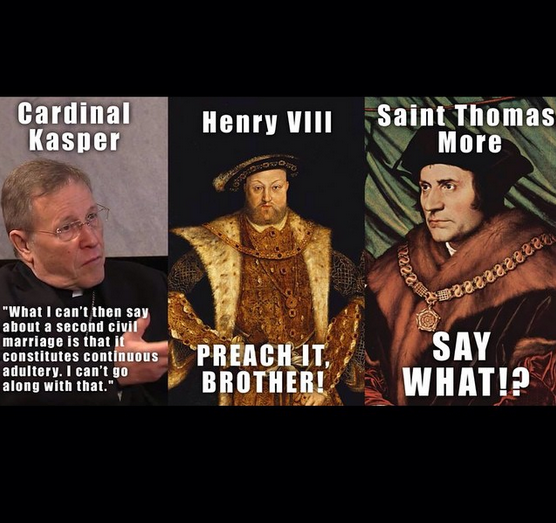 I think that Pope Francis is trying to think outside the box pastorally while remaining faithful to authentic Catholic teaching.

I do not believe he is some freewheeling liberal out to minimize Catholic teaching.

He wants the clergy to listen so as to find pastoral solutions to thorny pastoral problems.

The problem is that while he's a pastoral genius and could probably think of some pretty good solutions, I think his talent is actually rare.

I think some clergy might use this synod as an opportunity to flout Church teaching. Yet again.

And that's kinda the problem.

Sure, they will stick to the letter of the law for major things like weddings. You won't contract a second union without an annulment. There's no danger of that happening. Catholic clergy are very fastidious about those things. They may have their own ideas, but they stick to the letter of canon law so as to not get into trouble with their bishop.

But when it comes to Communion for remarried couples, for upholding the necessity of chastity outside of marriage (in the case of cohabitating couples for instance), there won't be a change.

This is what I find maddening.

Whatever pastoral solution is found for these situations won't make a difference, because many clergy aren't upholding the teachings to begin with.

And they're going to use what they can in this synod to bolster their practice. They're not going to suddenly start obeying.

Perhaps what we need is a synod on orthodoxy and  the clergy.