More contraception has not led to fewer abortions: French Study 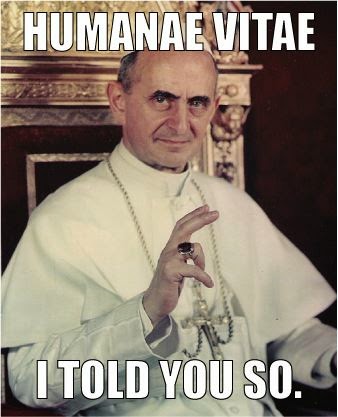 This study examines a number of statistical variables with regards to abortion in France. This blurb caught my eye:


Since the 1970s, greater use of effective contraception has reduced the frequency of unwanted pregnancies, but when they do occur, they are more often terminated, so the total number of abortions has not fallen.

According to this public health document from 2011, 90% of French women use contraception.

Now you might say that the culprit is the Pill and the fact that women forget to take it.

The thing is, Catholics said decades ago that more contraception wouldn't lead to lower abortion rates. And of course, we were right.

Proving once against that promoting contraception does not reduce the overall number of abortions.

You might object that IUD's are the future, that they are the ideal form of contraception,especially for young women who do not want to get sterilized.

I will grant that IUD's have a lower failure rate, and a woman who uses an IUD will almost certainly not become pregnant.

There was a 83% continuation rate at 6 months. The study said "there were no pregnancies reported of those with IUD continuations."

Of course, we don't have any info about those teens who did not continue.

What do you suppose those teens will do once they have their IUD's removed?

Perhaps they will use other forms of contraception. Or maybe not.

It's not uncommon for women to get pregnant in between methods of contraception. Some figure: if I get pregnant, I can have an abortion.

And that's not counting the complications that come from using an IUD. About 5% of the women were diagnosed with Pelvic Inflammatory Disease, which can threaten fertility.

Besides that, IUD's can prevent implantation and harm the unborn.

I have my doubts about IUD's as a means to prevent abortions.

To me, the only way to collectively reduce the number of abortions is to 1) change attitudes about pregnancy, babies and childbearing and 2) reduce the number of sexual acts where the partners are not open to procreation. If unborn children are loved from conception, if they are viewed as a potential blessing and not a burden, they will be far less likely to be aborted.