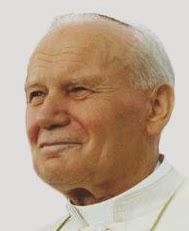 I really, really loved that pope for so many reasons. I suppose the reason that comes foremost to my mind is his willingness to say what needed to be said. My two favourite encyclicals from Pope John Paul II are Fides et Ratio and Evangelium Vitae.

It's always tough to be a faithful Catholic in this Church, but it was particularly tough before the advent of the Internet when faithful Catholics were often isolated from one another. Pope John Paul II's re-affirmation of basic tenets of the faith were like a breath of fresh air. His encyclicals confirmed you in your faith as you lived in a sea of unorthodoxy, when the Church needed those reminders so badly.

Then came the internet, And with Pope John Paul's writings, we could send liberalism in retreat. There's still lots of it around, but it's not like it was in the 80s. Catholics were so ignorant they didn't even know what an encyclical was. But the internet made possible a re-education of numerous Catholics, and his writings were definitely on the curriculum.

I am so grateful for how his teachings helped repel that advance of liberalism. There's still lots of liberalism to be sure, but his papacy represents the first serious pushback against "The Spirit of Vatican II."