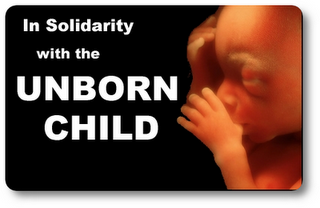 
As someone who works on abortion storytelling advocacy, I can tell you the ultimate goal of sharing abortion stories is not to change policies. The goal of storytelling in any movement is to normalize a stigmatized experience, to connect the stigmatized people who often live in isolation, and to increase understanding about a taboo issue.

The problem with these "abortion" stories is that they ignore the abortion itself.

In these stories, abortion is construed as an attempt to get unpregnant, without talking about the process itself. So the woman will talk about the circumstances of the conception, all her reasons for getting the abortion, and the dire consequences if she does not obtain the abortion.

But she will almost never talk about what is done to the unborn child.

And this is the crux of the abortion debate.

Many feminists are in denial about the logical dynamic of the debate. For them, the issue is about women's autonomy. They think the dynamic is as follows: women have autonomy, and the debate is caused by objections to the exercise of bodily autonomy, women's autonomy is absolute, therefore those objections are moot, and essentially motivated by misogyny.

It's a self-serving construction of the dynamic that makes them "winners" in their logic.

The reality is the conflict over abortion is whether one can kill a fetus. If there were no concern about what was done to the unborn child, there would be no debate over abortion.

How do we know that? Eliminate the unborn child from the debate. Does the debate go away? Yes. Pro-lifers are not protesting the termination of molar pregnancies or failed miscarriages. They're protesting the killing of fetuses.

But bringing up what abortion does to an unborn child is extremely uncomfortable for feminists, because it takes the focus off the woman. They think: as long as we keep the focus on "living and breathing human beings" (as they see it) then we win the abortion debate.

The problem with that approach is that it's intellectually dishonest. What feminists are trying to do is de-stigmatize abortion vicariously by making it equivalent to the women's experience of obtaining and undergoing an abortion.

But that's not abortion.

And abortion consists of a procedure that kills a fetus and expels it.

Feminists themselves know darn well that they can't take the focus off the woman and focus on the abortion. And in here lies the irony:  By refusing to disclose the details of what happens to a fetus during an abortion, they themselves act like they are ashamed of abortion.  They can't bring themselves to talk about sucking out a fetus, or dismembering him or sticking a needle in his heart. They know unconsciously that if they did they would further stigmatize it.

But if they don't talk about it, they continue to the stigma, because they don't seem to recognize it's not the women's experience or reasons that stigmatize abortion, but the process itself.

Could abortion ever be de-stigmatized? I doubt it. Even in countries like Japan and Russia where abortion is widespread and relatively unopposed, it is understood that it's a bad thing. It is understood that a human life is being suppressed.  Anything that kills one of like ourselves will always make us uncomfortable.

Email ThisBlogThis!Share to TwitterShare to FacebookShare to Pinterest
The Irony of Campaigns to De-Stigmatize Abortion or Why They're Doomed to Fail
2015-04-20T23:47:00-04:00
Suzanne
abortion|feminism|fetal rights|prolife|
Newer Post Older Post Home