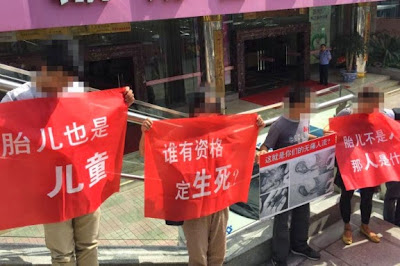 That took some guts.


For about 10 minutes on Saturday, young men and women stood in front of major hospitals in Chengdu, China, holding up red pro-life banners and graphic photos of abortion. After snapping a few photos and capturing the attention of a few passersby, the groups quickly left to keep ahead of local police officers who likely would have arrested them.

Their goal wasn’t to hold the protest but to start a conversation on social media with photos of their activism. The signs read “Unborn children are children too,” “Men don’t take responsibility, so women abort,” “If unborn children aren’t human, than what is a human?” Other signs depicted the abortion process and images of aborted babies next to the words, “Is this your ‘pain-free’ abortion?” referring to a commonly advertised promise from Chinese hospitals and abortion centers.