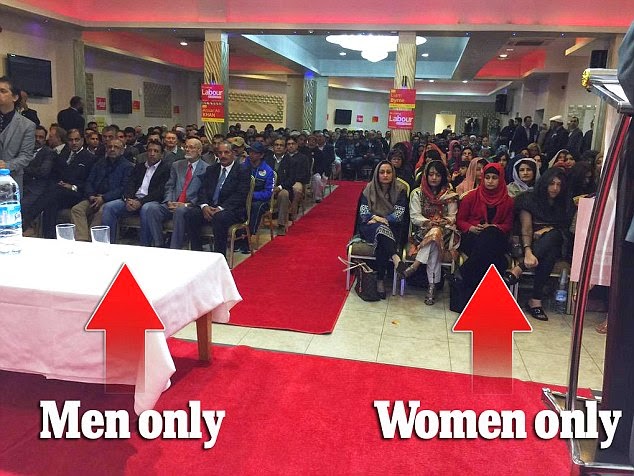 
Nobody was told to sit anywhere. It just happened that men and women sat separately – but what the photo doesn’t show is there were women and men together at the back.


Yeah. It just "happened" that several rows of men and women didn't want to sit together.

No women of any other races of backgrounds showed up and wanted to sit amongst the men in that meeting?

'What people need to understand is that this part of a process of engaging with Muslim women and this was the start of that. It is about giving women in some communities the confidence to engage.'People can say what they like. In 2010 I went to rallies where there were no women at all'.

So no women of any other background attended these meetings? And that's supposed to make us feel better?


But one senior party figure has said the seating arrangements ensured that women from the city's Muslim communities were able to take part - ensuring all were 'treated equally and respectfully'.

So in order for women to participate, they have to kowtow to segregationism?

Luckily there were a few outraged leftists who oppose this sort of thing.