Links: Why I Remain Catholic, Abortion is a Shady Business, Cardinal Burke, Democrat vs. Republican Occupations

Dear Catholic World: Why do YOU Remain a Catholic? I don't choose to "remain" Catholic, as if I contemplated going somewhere else. I choose to be Catholic because being Catholic makes me happy.

I am Catholic because of the intellectual foundation of its Truth, a Truth that dignifies, a Truth that leads to God's love and is God's love. When I contemplate that Truth, I feel beautiful and elevated. It's like looking at a wonderful poem, so intricate, so well-designed, and there's always another allusion, another layer, another truth on the horizon-- beautifully communicated and which leads to insight into my human condition and my relationship with God. This gaze at the Truth, this is beatitude. This is what's heaven going to be like, a constant embrace of the Truth, but in such a way that it will be more easily discerned and never end. This is why I am Catholic. You can't find anywhere else except in the Catholic Church.


From the "Abortion is a Shady Business" file: Disgraced Ottawa abortionist resigns amid grisly misconduct findings.  I loved this blurb.

When asked by LifeSiteNews if he ever considered the fate of the unborn child, Sim replied: “I’m a doctor, not a priest.”

It always tickles me when LSN contacts the Opposing side. How do they get them to talk? If I supported abortion I'd tell them to screw right off, and that's putting it nicely.

Canada’s first conference on men and abortion next week in Niagara Falls.


Yesterday I met Cardinal Burke at a mass at St. Theresa's parish. I got to meet the dear Cardinal. A really nice man. 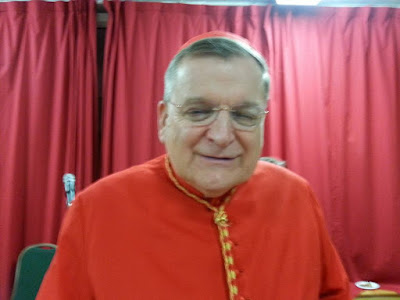 A priest by the name of André Samson was not happy with Cardinal Burke's visit, and his pleasure was made known through an email that was read on air during the course of an interview on Radio-Canada. The interview was about Cardinal Burke, who was described as "ultra-conservative" and "flamboyant". Not surprisingly, Father Samson is a dissenter from Church teaching.  Here's what the email said:

An email was sent to us from the Ottawa region. “As a gay [man] and as a priest of the Archdiocese of Ottawa, I am upset at the visit of this person. I particularly blame those who invited him, the CCO Movement, Catholic Christian Outreach —who seek to provoke and to distance themselves from the current pope. The resistance towards Pope Francis has regrouped themselves around this operetta cardinal who likes to disguise himself as a drag queen. I know well today’s youth because I’ve taught at the University of Ottawa for the last sixteen years. I can affirm that Burke will have more success at Mado [CIA Note: a drag queen bar] than with the university students that CCO looks to convert.” That was a listener by the name of Mr. Samson who does not beat around the bush. // Minute 5:49-6:30

I will note that last night, Cardinal Burke wore a bejeweled mitre, but his vestments were the usual ones. Hardly flamboyant.

Thanks for CIA for first blogging this story. I suspect we'll be hearing about Fr. Samson in the future.


Here's a little interesting nugget: Democratic vs. Republican occupations Some of them surprise me. Why would urologists and plastic surgeons be Republican?