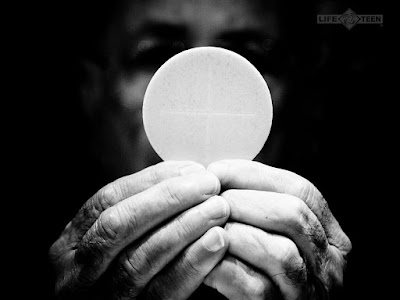 From the It Shouldn't Be News file:


According to The Advocate, Ardillo was denied communion by Rev. Mark Beard, the priest overseeing his mother’s funeral mass, for one controversial reason – homosexuality. It has been reported that Ardillo, a married gay man, was denied the right to partake in the Holy communion because of his sexual orientation. Needless to say, the long-time Catholic was highly displeased by the directive. But how did the priest learn of his sexual orientation?


Ardillio believes the priest learned the information after reading his mother’s obituary where it clearly stated that he was married to a man. Although not confirmed, the obituary may have contributed to Rev. Beard’s decision.

Let's get one thing straight. Nobody is denied Communion because of their sexual orientation.

One can be denied communion for public acts of sin that are contrary to the faith.

Entering a gay marriage is public of sin.

Once again the media is conflating sexual orientation with acts, just like it did with the story of the gay wedding cake. It needs to do that in order to advance its agenda. But it's intellectually dishonest. If a gay man comes to communion, nobody knows his history, he will receive communion, just like when a gay man goes into a Christian bakery, he will be served a cake as long as a it's not for a gay wedding.

The Church, of course, has shot itself in the foot because it so rarely enforces these provisions that people are surprised and hurt when people are denied Communion. Considering the widespread scandal of politicians and other public figures who support abortion and gay marriage, it should be a little more routine.