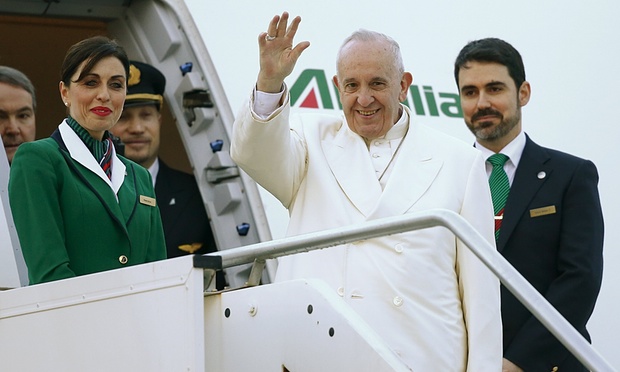 This is the kind of thing that annoys me about journalists...

They are supposed to be in the fact business, but they ignore basic facts!

Headline: First meeting of Pope and leader of Russian Orthodox church since 1054

This meeting between Pope Francis and Patriarch Kiril has been overhyped. We all want to see Christendom re-united, but an hour-long meeting between the two is only a first step and nothing of any importance was going to happen. Anyone with even the most cursory knowledge of Christian history would know that.

But the media loves a narrative. They have to make a story sound more important than it really is to get clicks and maybe push a liberal agenda. The sad thing is that people who should know better eat this up.

I'm not trying to be cynical. I'm glad it happened and it needed to happen. But its symbolism doesn't justify exaggerating its importance, creating a false narrative and inflating expectations. It misleads a lot of faithful Christians into thinking something momentous is about to happen when it's not.

I just wish the Catholic press were a little more critical of the coverage and maybe not enter into the hype. They have to report this, but a little perspective would be in order. Nothing momentous happened after Pope Paul VI met Patriarch Athenagoras -- our two Churches still operate on their own separate agendas.

It was just a meeting folks. These kinds of meetings happen all the time. Nothing to see here, really. The Russian Orthodox Church will continue doing its thing, So will the Catholic Church.

UPDATE: Decent column  here on this meeting by Fr. Raymond de Souza. He gets one fact wrong, though. Constantinople fell in 1453, so it could not have prompted the establishment of the Patriarchate of Moscow in 1448. As I said, the real triggering event was the Council of Florence, which briefly saw the union of East and West.