Pope Francis Did Not Allow Exceptions on Contraception 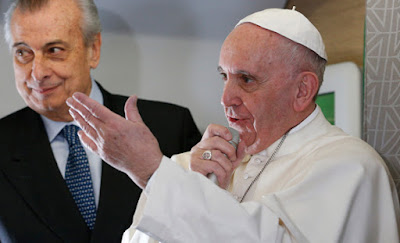 Whenever Pope Francis holds a press conference on an airplance, the conservative Catholic blogosphere goes into a collective meltdown because he always makes statements whose vagueness lend themselves to gross misinterpretation and controversy, alarming and confusing the faithful.

I'm going to give you a tip that always works for me.


I realize from a big-picture point of view, this is not entirely comforting because even though you may be reassured, the rest of the world isn't. They are not used to the nuance necessary to understand Catholic doctrine. So if the pope gives even the slightest hint of an opening on a matter of doctrine, it turns a full-blown reversal in the minds of the media.

And I can see how this can be frustrating to the half-educated Catholic who is constantly led to believe that the Church "evolves", that the Church will, eventually, side with worldly thought on matters of doctrine-- especially of sexual doctrine. The Church did a one-eighty at Vatican II, conventional wisdom goes, what's to say the Church won't change her mind on any number of contemporary issues?

So the media tantalizingly dangle these misleading messages to the general public, creating these false hopes that the world's great bastion of morality will finally "see reason" and side with it on sexual issues, and get with the program so that progressives can more easily push forward on the fight to implement more government in your lives.

The latest example  of this sisyphian attempt to change Church doctrine is Pope Francis' statement on the Zika virus. He said:

On the ‘lesser evil,’ avoiding pregnancy, we are speaking in terms of the conflict between the fifth and sixth commandment. Paul VI, a great man, in a difficult situation in Africa, permitted nuns to use contraceptives in cases of rape.

Now LifeSiteNews reports that Fr. Federico Lombardi, the Pope's spokesperson, said that the Pope indeed was talking about using contraception in exceptional circumstances on Vatican radio.

Now note, this is Fr. Lombardi's interpretation of the Pope's words, not the Pope himself.

How many times have people attributed a certain meaning to his words, only to find out that that interpretation is false.

Consider this passage from a National Geographic article about the Vatican:

When Federico Wals, who had spent several years as Bergoglio’s press aide, traveled from Buenos Aires to Rome last year to see the pope, he first paid a visit to Father Federico Lombardi, the longtime Vatican communications official whose job essentially mirrors Wals’s old one, albeit on a much larger scale. “So, Father,” the Argentine asked, “how do you feel about my former boss?” Managing a smile, Lombardi replied, “Confused.”

Lombardi had served as the spokesman for Benedict, formerly known as Joseph Ratzinger, a man of Germanic precision. After meeting with a world leader, the former pope would emerge and rattle off an incisive summation, Lombardi tells me, with palpable wistfulness: “It was incredible. Benedict was so clear. He would say, ‘We have spoken about these things, I agree with these points, I would argue against these other points, the objective of our next meeting will be this’—two minutes and I’m totally clear about what the contents were. With Francis—‘This is a wise man; he has had these interesting experiences.’”

Chuckling somewhat helplessly, Lombardi adds, “Diplomacy for Francis is not so much about strategy but instead, ‘I have met this person, we now have a personal relation, let us now do good for the people and for the church.’”

It seems that Fr. Lombardi doesn't really understand his boss.

One way to know what Pope Francis meant about contraception is to see what he has said about it in the past.

Responding to the question of whether the Church should revisit the issue of birth control, Pope Francis replied: “It all depends on how the text of Humanae Vitae is interpreted. Paul VI himself, towards the end, recommended that confessors show great kindness and attention to specific situations.

“His genius proved prophetic: he had the courage to stand against the majority, to defend moral discipline, to exercise a ‘brake’ on the culture, to oppose [both] present and future neo-Malthusianism. The question is not that of changing doctrine, but to go into the depths, and ensuring that pastoral [efforts] take into account people’s situations, and that, which it is possible for people to do.”

He also said in an interview with Fr. Anthonio Spadaro that while he didn't want to speak about birth control all the time:

To me, it is clear that Pope Francis adheres to Church teaching. But, for him Church teaching isn't the final word, it's the framework. His focus is on finding innovative, pastorally sensitive but orthodox solutions to pastoral problems.

This emphasis on pastoral sensitivity and innovation is what throws conservatives. To them, those approaches are red flags for dissent and heresy. But that's not the pope's approach at all. He accepts Church doctrine, but he refuses to be boxed in by our subjective, human and relative expectations. He trusts that God will find a way to move past our mindset to get to a solution that is relationally satisfying while not violating any Church teaching.

This is not a heterodox approach, but it is risky, especially in the context of our almost universal dissent from teaching. Re-stating doctrine, the way Pope Benedict did, assures that the paradigms of action are kept at the forefront. When doctrine is less emphasized, the atmosphere of ambiguity gives the impression that the Pope isn't serious about respecting Church teaching and that there is an openness to trying approaches that were once-condemned. It also gives modernists the chance to re-package their errors to make it seem like their beliefs are acceptable, when they are not.

I'm somewhat sympathetic to the Pope's approach, but it's not because I don't care about doctrine. It's because I think that it's psychologically difficult to use doctrine as outreach, and outreach is ultimately what we need when the vast majority of Catholics don't even attend Church. I am completely behind the idea of fidelity to the Magisterium, but how do you get lukewarm Catholics to comply when they don't give a sh*t? Sometimes an intellectual approach can help, but most people don't care about that. Most people need to be reached through the heart, and this is what Pope Francis is trying to do: touch people's hearts so that they want to come to the Church and get more of what it's selling (so to speak). Conservative Catholics, on the whole, are terrible at reaching for the heart. We like to battle over ideas-- and I'm not knocking that, I do it, too. But that battle of ideas that we carry out on the internet has almost nothing to do with people's preoccupations and day-to-day lives, and that's why we have trouble reaching people. It's all well and good to have a solid apologetical case for the Catholic Church, but that's not where people are. They have needs, and we are not fulfilling them.