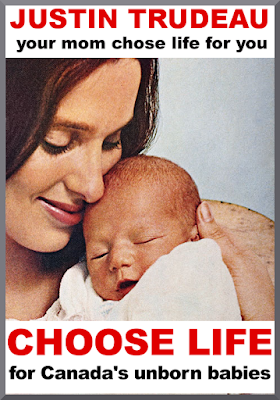 I have so many good links I said to myself: what the hay? Let's do a links blogpost.

NOW president: ‘I don’t care’ if life scientifically begins at conception, and if babies have to die in the name of reproductive autonomy, so what? Right feminists? Right.

Mifegymiso (abortion pills) Official Update -- It appears the restrictions on RU486 will remain. See also: Restrictions on abortion pill in P.E.I. give doctors ‘access to an excuse’ not to supply them: critics

No, Donald Trump did not eject a baby. I want to make it clear: I don't necessarily want Donald Trump to win, but I absolutely want Hillary Clinton to lose. So I do post links and messages that are both supportive and critical of Donald Trump. In truth, Donald Trump makes me want to cry, and I'm devastated he's the one who has to win in order for Hillary to lose. I would have been happier with practically anyone else. Except Justin Trudeau. That's how bad he is.

The American Catholic bishops denounce a politician who officiated at a same-sex marriage, but won't name him. Which I think is cowardly. Do your job guys.

Pro-Lifers and Freedom Lovers: GET OUT YOUR CREDIT CARD. Please donate to Pat Maloney's GoFundMe campaign that will help fund her court case against the Ontario government. She is trying to get the Government to reveal to her the actual number of abortions performed in Ontario. There is a statute that explicitly forbids access to information requests on abortion, which is outrageous. We have a responsibility to support all those activists who do the heavy lifting and move the pro-life agenda forward. So please. Give! And be generous. And of course, share this on your social media.

UK: Mothers abort 20 IVF babies a year after discovering their child would be born with Down's syndrome "Down’s is the chief reason why women who have paid for expensive IVF treatment have terminated their pregnancy, according to analysis by the Human Fertilisation and Embryology Authority."


A recent homily given by a young priest hit a nerve among many of the Faithful and perhaps caused us to pause and to think. Father Jacques Hemel, the martyred 86yr old french priest who went willingly to his death caused by two young ideologically bent followers of radical Islam. The content of the homily was simple,.. 'Where were the men in the Parish to rush and protect this priest?' We heard about the women and the nuns who assisted at the Mass,.. So where were the 'dudes' so to speak?


He goes on to decry the crisis on manhood in the Church.

Just an interesting abstract: The average age for pregnancy detection is 5.5 weeks and hasn't changed in 23 years.