Thomas Fienus and the Decline of Aristotelian Embryology 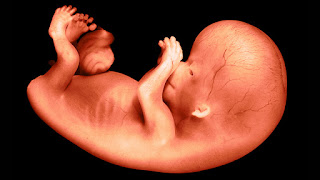 During the Middle Ages, Aristotle's views on embryology were predominant, and shaped Christendom's approach to abortion. Although abortion was always regarded as a grave sin, regardless of stage of pregnancy, the abortion of inanimate fetuses (i.e. fetuses without souls) was not considered homicide, whereas the death of an ensouled fetus was considered murder.

The Renaissance, the Reformation and the Scientific Revolution all challenged Aristotelian views in many fields of knowledge, and embryology was no different. Thomas Fienus (1567-1631) was a natural philosopher (I hesitate to call him a scientist) who introduced innovative ideas to the question of the beginnings of human life. Fienus was a Professor of Medicine at Louvain and in 1620 he published De formatrice foetus liber, in which he rejected the delayed hominization in favour of the belief that ensoulment happened three days after insemination, at the latest.

Not exactly "life begins at conception", but pretty close.


In Aristotle's vision, a newly formed fetus developed a vegetative soul, then an animal soul before finally receiving a human soul. Fienus said that this didn't make sense. In order for a fetus to self-organize as a human being, he needed a human soul to do that. (The modern way of saying that would be that organisms don't change species, but it would be a bit anachronistic to put it that way.)

Fienus's approach was at once traditional and innovative. He was traditional in that  his book was organized in the question-objection-answer format familiar to readers of Aquinas' Summa. He also placed some importance on experience as a source of knowledge; but whereas today we would expect a scientist to perform his own experiments, Fienus relied on the observations of others. In that sense, he was more of a commentator than a scientist.  Nevertheless, he challenged the idea that Aristotle should be held as an authority for authority's sake, and pleaded for the freedom to question and verify his conclusions. This was a revolutionary thought in an period when the antiquity of an authority was thought to be a mark of credibility.

Some might wonder how talk of souls could be considered scientific. It's true that souls themselves are not the object of scientific study. However, the physical manifestation of a living being was believed to manifest the existence of a soul. Since the soul was the form of the body, the body would give clues as to the kind of soul it possessed. Vegetables had vegetative souls, animals had sensitive souls and humans had rational souls. So the question about souls led to the investigation about the origins of the human body.

Non-scientific ideas, even erroneous scientific ideas, have had an important influence on the conduct of scientific inquiry, and have often spurred fruitful investigations. Findings and discoveries don't lose their merit just because they were produced under doutbful influences. I'm not trying to knock metaphysics. I'm trying to tell people who don't believe in metaphysics that these inquiries were not all a waste of time just because they were spurred by religious and philosophical questions.

Fienus was prolific writer, and like many natural philosophers wrote on a number of topics. He wrote about surgery, comets and the influence of the mother's imagination on the unborn child. Although dismissed today, that latter topic was huge in the Early Modern period. It was believed that if a mother had unpleasant thoughts or emotions at the time of conception or during pregnancy, it could adversely affect a child. Guidebooks were written to give women tips on how to make sure their emotional states produced optimal outcomes. This was serious stuff!

I did an extensive Google search on Thomas Fienus and there doesn't seem to be a lot of biographical information about him. I couldn't even find a portrait of him.  It just seems a shame that someone who was instrumental in shaping our image of the unborn has basically been forgotten by the wider culture.