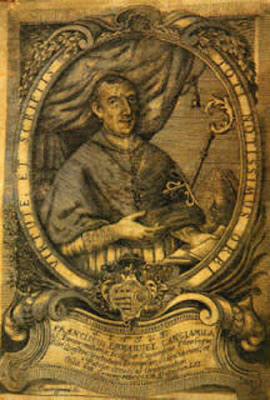 In researching my Timeline of Pro-Life History, I came across a number of people whom nobody has ever heard of, but whose influence on the welfare of the unborn was monumental.


When Cangiamila makes his appearance in academic writing in English, it's almost always in passing or as a footnote. As far as I can tell, very little has been written about him in English.

Fr. Cangiamila was a major figure in the Sicilian Church. He was the Inquisitor of the Kingdom of Sicily, but his main claim to fame was his treatise Sacred Embryology, on the duties of priests to the unborn.

If ever a figure in the Church treated the unborn as persons, he did.

Sacred Embryology may seem like a strange title to our modern ears. But as he explains, he coined the word "embryology" to mean "discourse on the unborn." There was no word to categorize what he spoke about so he invented one.

Cangiamila wrote a book to describe in detail the duties of the priest towards the unborn. The number one duty is to make sure these babies are baptized. So he advocated for the baptism of the unborn during labour in utero if there was a danger of the baby dying during delivery; he advocated for the use of the cesarean if the mother died in labour, and gave details on how to perform one so that priests could do it in the event that no surgeon could be found. He even made a serious contribution to medical history in giving instructions on how to resuscitate a newborn baby.

His book contains a number of details about the science of the day regarding the unborn, and opines that the Church doesn't know the exact moment of animation (which is actually what the Church beleives today.)

His book, written in Italian, was a sensation and translated into a number of languages: Latin, modern Greek, French, Spanish and so on. It ran into several editions. Unfortunately, it was never translated into English.

The idea of baptizing fetuses in danger of death, or performing a ceserean on a dead woman in labour was not new. For example, there was an instrument known as "Mauriceau's syringe" (in French a "clystère de baptême")  that was used to baptize a baby in utero who was in danger of death (once labour had begun.) The syringe had a long tube meant to fit into the birth canal so as to be able to reach the baby for baptism. Almost every obstretrics book in French contained information on how to perform c-sections.

But Cangiamila popularized the notion and brought it to priests. These ideas were not without controversy, however (as per this article in French). Getting a priest or a family member to baptize a baby in danger of death, or getting them to perform a cesarean (when no surgeon was around) offended some people's sense of modesty. Family members of the dead mother did not necessarily appreciate the prospect of seeing their relative sliced up-- she and the family had already suffered enough, they did not want to confront another ordeal. And the operation itself-- slicing a pregnant belly-- was not for the faint of heart. Even seasoned surgeons had trouble with it.The surgeon had to perform a large incision-- after making sure the woman was dead-- and not hurt the baby in the process.

Although Cangiamila's ideas had much institutional support in  the 18th century (including praise by Pope Benedict XIV), support was not universal in the Church. One example of this was the case of Blessed Jean-Martin Moye (1730-1793).  He was a priest who published pamphlets based on Cangiamila's ideas, and a cabal formed against him and he was essentially demoted by being transferred to another parish.

As I said, there is very little of this in English, and I even had trouble finding information on Cangiamila and these fetal baptisms in French. Someday I hope we can remedy this situation and bring to the fore an important Church figure who genuinely held the cause of the unborn to heart.