Early 20th Century: The Fetus was Unknown Because Pregnancy was Censored... 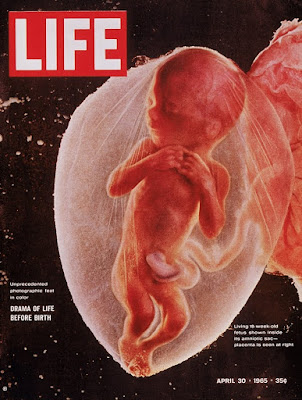 So I have been busy doing some historical research. I just got back a paper I wrote on fetal imagery—specifically Lennart Nilsson’s photoessay in an April 1965 issue of Life magazine. One thing that I learned that was very surprising to me was the degree to which pregnancy—and by extension the unborn—had little visual presence in the first half of the twentieth century. I was very surprised when I realized the degree to which all things having to do with pregnancy was shrouded in secrecy. Two examples to illustrate:

1. Maternal clothing catalogues from the 1920s to the 1960s featured models who never looked pregnant, and the clothes were designed to hide the pregnancy. It just was not considered polite to shed light on the result of sexual activity.

2. In 1938, Life magazine published a photo essay featuring a baby being born and cleaned up. The mother’s nudity was completely covered up, but the issue was still banned in 32 cities, and the publisher, Roy Larsen, had to stand trial for this indecency. He was acquitted, and public opinion was generally against such censorship, but it goes to show what a more conservative stream of opinion thought of this, and that it had some legal clout to enforce this point of view.

I can’t imagine that in such a visual and mediatic culture, the unborn were properly known and visualized. I suspect that, for most Americans, they were effectively abstract entities and reified. I think this might explain, to some degree, why Lennart Nilsson’s photos were so popular. They made the unborn seem like living beings.

If this is the reaction of the general public to the unborn, then it’s not really surprising that pro-lifers had a hard time selling the public on their humanity. If the unborn had been conceptualized as equal human beings with rights, a photo essay about them would probably have been less sensational. People don't get excited about a photo essay about born humans because they are familiar and their moral status is not contested. But people did get excited about a photo essay about the unborn, because they were unfamiliar, and Nilsson’s photos dispelled a number of myths: (e.g.,that they were blobs of tissue, part of a woman’s body, that they were inert, indistinct or amorphous beings until quickening) and that taboo-breaking quality is what sold the readers on the issue. But it’s precisely because it was taboo-breaking that it points to how far off the American public was from genuinely recognizing the humanity of the unborn.