This is going on your PERMANENT RECORD: Archbishop to Priest Involved in SSM 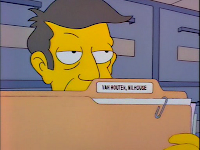 Because the threat of mentions on one's permanent record sure stopped many would-be juvenile in grade school.

I get the distinct impression this rebuke is done for show because he went public, not because he opposed Catholic doctrine.

As Catholic in Brooklyn writes:

Father DeVito's cousin is in danger of eternity in hell fire. A Catholic priest should in no way lend his presence to such an abomination. A rebuke that is a permanent part of the record? No, I don't think so. Father DeVito knew this was wrong. He should not have been there

Maybe pro-lifers are a bit optimistic in expecting bishops to discipline wayward Catholic politicians if this is how priests are disciplined for their lack of orthodoxy.

Email ThisBlogThis!Share to TwitterShare to FacebookShare to Pinterest
This is going on your PERMANENT RECORD: Archbishop to Priest Involved in SSM
2012-09-01T21:23:00-04:00
Suzanne
bishops|Catholic|clergy|homosexuality|Marriage|priests|
Newer Post Older Post Home